Bob Ryszka, 21, is about to finish his seventh and final season with the Blue Knights, but his drum corps experience has been very different than most. He was a member of the corps' soprano line for four years starting in 2001, in the color guard the next year, was drum major last year, and is now spending his final year back in the guard. As Ryszka now prepares to "age-out" of this activity in less than a month, he reflects on the incredible journey he has made throughout his time in the drum corps activity. 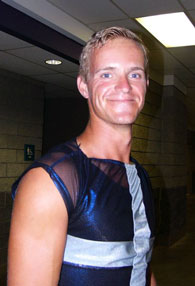 Bob Ryszka
"These seven years have been a great experience for me," said Ryszka, who never actually intended on joining the color guard during his fifth year. "I planned on taking a year off in 2005, but our drill writer called me to fill a mellophone spot, and when I got there I ended up filling a color guard spot. This was a very different experience because I have never spun a flag in my life. I learned how to do drop-spins my first day, and from that day on, I really liked guard." Ryszka's diversity of positions in the corps has made him a model corps member of the Blue Knights as he puts the corps' needs before his own. He pushed himself to be drum major in 2006 to have more of a leadership role with the corps, and to help challenge everyone to reach a new level of excellence. "Being a drum major gave me an opportunity to see how the little things in drum corps really mattered, and how much responsibility you have when you're a leader," he said. "Even though I'm back in the guard this year, I still think I'm a leader, but in a different capacity. I do my best to lead by example, and I think that's the most effective way one can successfully lead a group." After being in the corps for so many years, Ryszka has learned many great values that he will carry with him for the rest of his life. He proves that the lessons learned in drum corps are not easily forgotten. 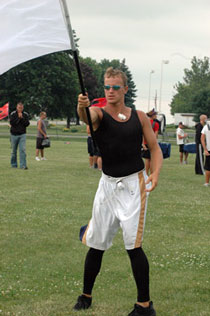 "Drum corps has certainly given me a stronger work ethic. I'm more focused now when I'm at school and I'm getting almost straight-A's now. Without drum corps I wouldn't have the drive to always be my best. There are so many life lessons that you learn in this activity, and each year I learn something new." Once the season ends in a few short weeks, Ryszka will take everything he has learned the past seven years, and will start applying them to his future outside the activity. He plans on going on a Mormon mission for his church, and as this two-year task will be very structured like drum corps, he is very confident that he has what it takes to be successful in it. As he and the Blue Knights prepare for the World Championships in Pasadena, Ryszka feels very lucky to have been able to spend so much time with his friends. "You have to be prideful in your corps, and you have to stick with them and work hard. That's what I did and I'm very proud to be here. I've been enjoying every moment of this activity, and I'm very excited to perform my last show with the corps I love." Listen to an audio interview with Ryszka from July 14 in Atlanta, Ga. (MP3, 3.1MB) Audio interview by Christina Mavroudis.