Paula Hyman, a member of the Cadets from 2002-2006, is in Japan during December and January as a member of the Aimachi Marching Band, a group based near Nagoya. She will share her experiences in a series of DCI.org columns over the next few weeks. Since my last column, my understanding of the Japanese language has greatly improved. Don't get me wrong, I am still terrible at it. But let's just say I am retaining more, and I can understand more words and phrases than I could a week ago. Getting better everyday—just like in drum corps. I've been progressing well as a member of the Aimachi band, and every day I am here, I pick up on differences and similarities between American drum corps and the Japanese marching bands. There aren't any age rules in Japan, and because of that we have a 12-year-old horn player, as well as quite a few members in their 40s and 50s in the group. Also, Aimachi's marching and performance style is a mix of several different Drum Corps International groups. For instance, we use the Cavaliers' marching technique, the Cadets' horns up and down movements, and most of our show music is reminiscent of Santa Clara Vanguard. It's pretty interesting to see all of those styles mixed together, but it's also cool. The Aimachi designers and staff members have taken bits and pieces of influence from American drum corps and put them all together to create a style of their own. As a former Cadets member, it is pretty flattering to me. Our final competition of the season is on Jan. 14, so the "push" toward the end of the season is beginning to happen. American designers Michael Gaines and Andy Toth from the Cavaliers are now here working on Aimachi's winter guard and drum line shows, and more American instructors like Gordon Henderson and Mitch Rogers will arrive to work with the band in a few days. While preparing for the upcoming end of the season, we had time to celebrate Christmas which ended up being one of my favorite Christmas' of all time. People don't exactly celebrate Christmas here like we do in the states, but they still have a gathering every year called the "December 25th party." So, on Dec. 25, we headed down to a restaurant for a "shabu-shabu" dinner with two bus loads of people. In many Japanese restaurants, you must take off your shoes before entering the dining area. I think it's pretty cool, but that is coming from someone who doesn't really like wearing shoes. If I could live in Old Navy flip flops for the rest of my life, I think I would! 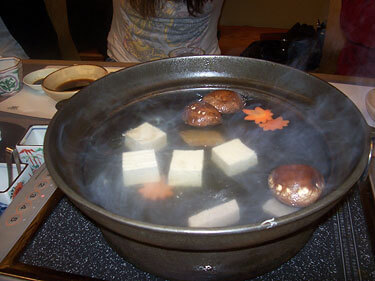 The shabu-shabu pot before adding meat and the rest of the good stuff.

We had an entire private room for our party. In traditional restaurants, the tables are rectangular and very low to the ground, so you actually sit on the floor to eat. There were 12 people at my table and three pots for us to share with four people per pot. Shabu-shabu is prepared by submerging a very thin slice of meat or a piece of vegetable in a pot of boiling broth made with konbu (kelp) and swishing it back and forth several times. "Shabu-shabu" roughly translates to "swish-swish," and that sound is where the dish gets its name. Cooked meat and vegetables are usually dipped in ponzu or "goma" (sesame seed) sauce before eating with a bowl of steamed white rice. After that Christmas dinner, a large group of us headed to sing karaoke. In Japan, there are establishments that are specifically for karaoke. Your party pays a certain amount of money for a one or two hour session in a room. The room is nicely sized, and inside are couches, tables, TVs and wireless microphones. Food and unlimited drinks are included and are only a phone call away. Just pick up the wall phone and place your order. A few minutes later the waitress will come to the room to deliver everything. Talk about service! 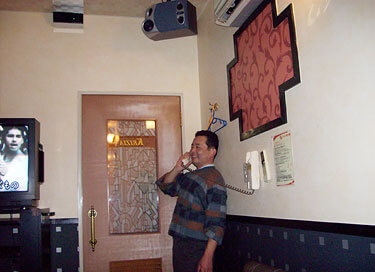 Hori-son, a member of Aimachi's French horn section, calls in his order with ease from our karaoke room.

While being able to explore the city outside of rehearsals and performances I've noticed that Japanese cities are quite a bit cleaner than cities in America. I love the place, but if you have ever been to New York City, you know that it can be kind of dirty. Nagoya City is very clean even though it is sometimes a challenge to find a garbage can, so I have generally ended up holding onto my trash until I can find a receptacle. Really though, it amazes me how a city with hardly any garbage cans, could be so clean. Have a question for me about my experiences in Japan? Send me an e-mail at thepaula9@yahoo.com.
Paula Hyman marched as a member of the Cadets from 2002-2006, in the mellophone section. She was section leader in 2004-2005, and horn sergeant in 2006. Hyman lives in South Florida where she teaches various marching bands and middle school brass sections. She will work with Teal Sound during the 2007 drum corps season.