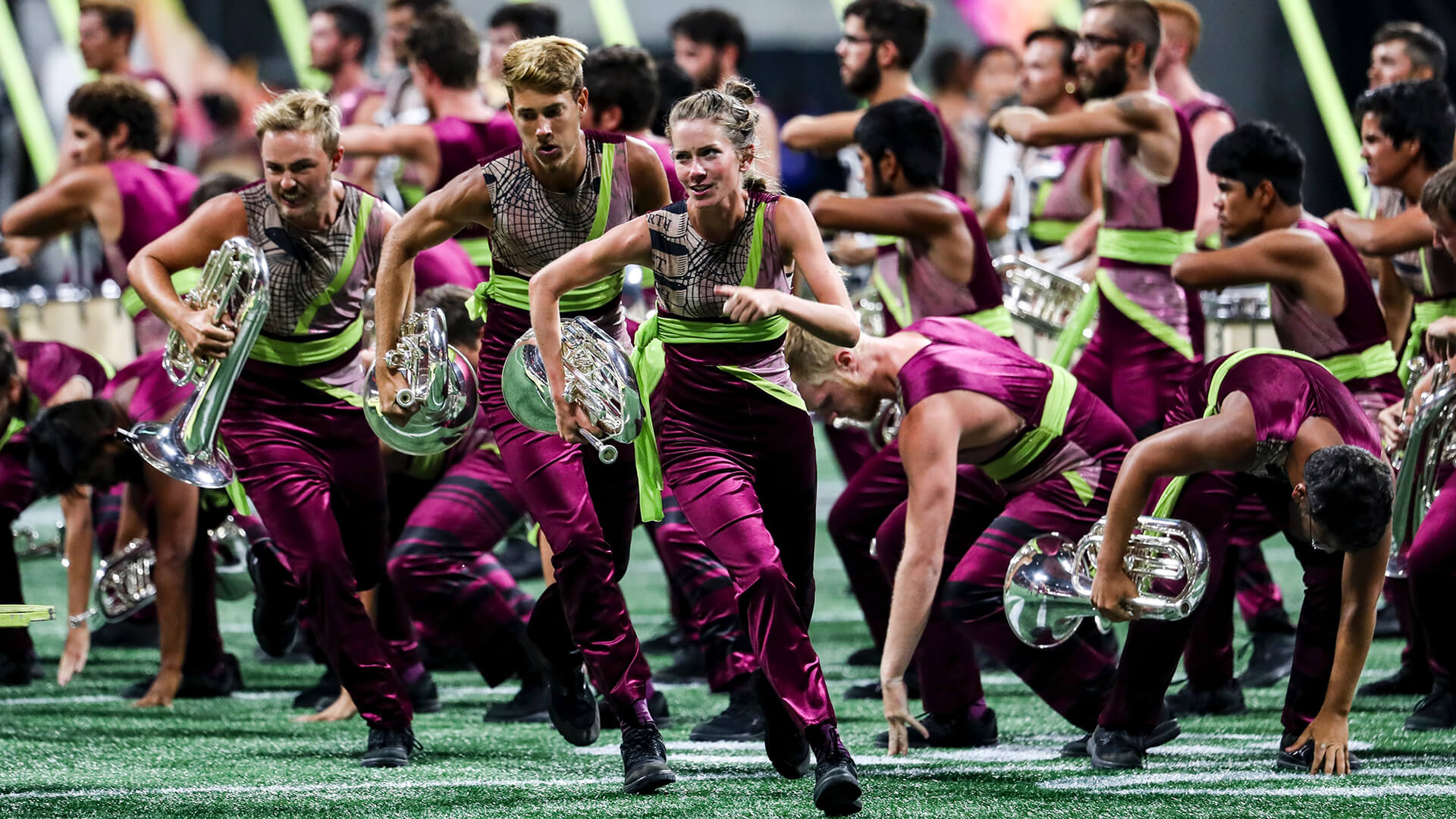 The Boston Crusaders jumped into the top five by a hairline margin in Atlanta. Photo by: E. De Stefano, DCI.org

After opening up a lead of just over a point Friday night in Murfreesboro, Vanguard won its second consecutive regional with top finishes in general effect, percussion and total music.

“Man, that run was amazing,” Vanguard drum major Carl Huang said. “That was everything that we’ve worked for this weekend, and we’ve still got more in us. We’re ready for tomorrow, too.”

View all scores from the DCI Southeastern Championship

While keeping a close eye on their northern California neighbors, the Blue Devils continued to gain a bit of breathing room over the Bluecoats. The Concord corps expanded upon its most recent advantage thanks to strong outputs in the visual caption and music analysis. 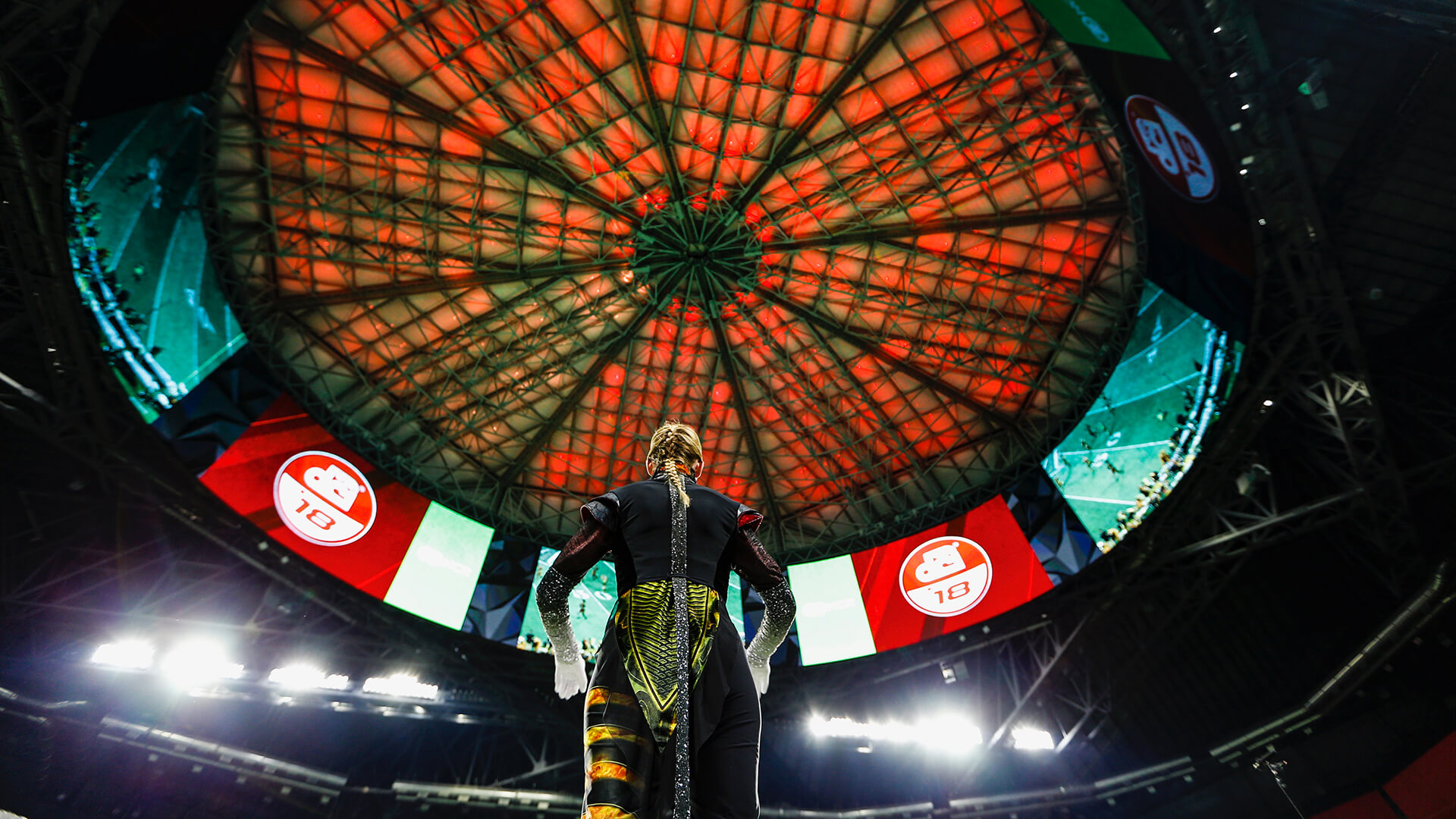 Once again winning the brass caption by a slim margin over Vanguard, Carolina Crown also took top-three marks in percussion and total music.

The corps’ distance from the top three has continued to fluctuate in recent weeks; its 1.25-point cushion was identical to Friday night’s in Murfreesboro, where the South Carolina corps debuted noticeable changes to its final movement.

Just behind Crown, Boston Crusaders eclipsed The Cavaliers for the first time since 2013 by a rail-thin margin of .050, which matches the closest any two corps have been this season without being tied.

“I felt like everyone came off the field feeling so proud,” Boston drum major Kaitlin Oresky said. “We’re just so proud of what we’ve been doing the past couple days and having such a good run. Hearing the reward and everything, everyone’s just glowing.” 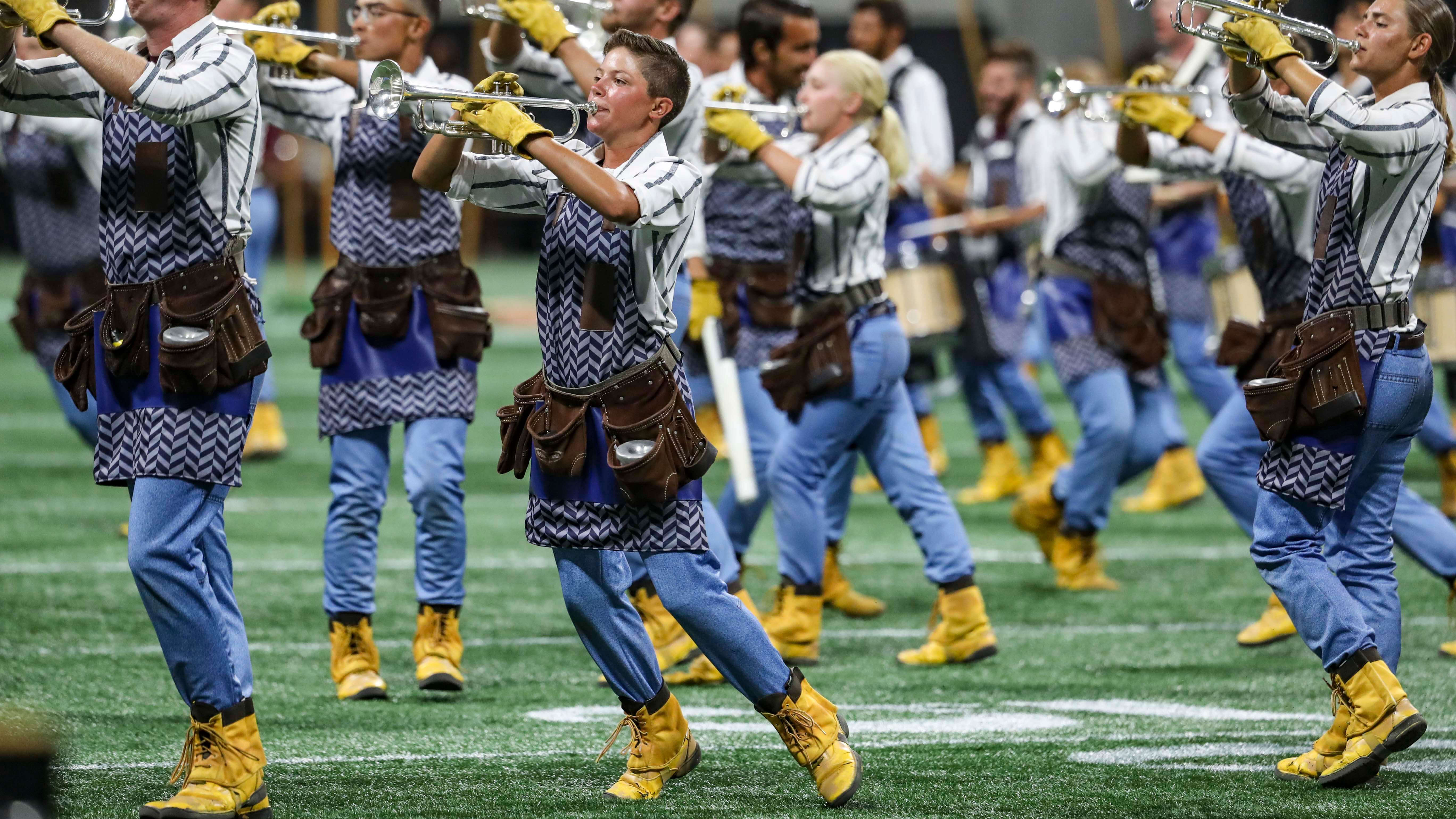 Competition among the back half of the Top 12 remained heated, with The Cadets leading the way by a significant margin thanks, namely, to its scores in general effect.

For the first time since 2016, the Blue Stars defeated the Blue Knights, making up for a close loss to the Denver corps last weekend in San Antonio. The La Crosse, Wisconsin corps posted stellar numbers in the visual captions, particularly color guard, where it placed sixth.

In Atlanta, Blue Stars also debuted a change to the ending of its production, in which the corps reprised The Carpenters’ “Rainy Days and Mondays” from earlier in their program, “The Once and Future Carpenter.”

“It adds a lot of energy,” Blue Stars drum major Taylor Smith said. “The horn line plays it incredibly, the tempo gets a little faster, the energy pumps up, they’re doing this crazy drill and playing this beautiful music. It’s just driving them to take this ending and make it a true finale for the show.”

Phantom Regiment and Mandarins remained neck-and-neck, after scoring historically close to one another — just two tenths of a point — Thursday in Birmingham. Despite Mandarins owning a lead of more than six tenths of a point in general effect, Regiment evaded the historic upset by a hair-thin margin. 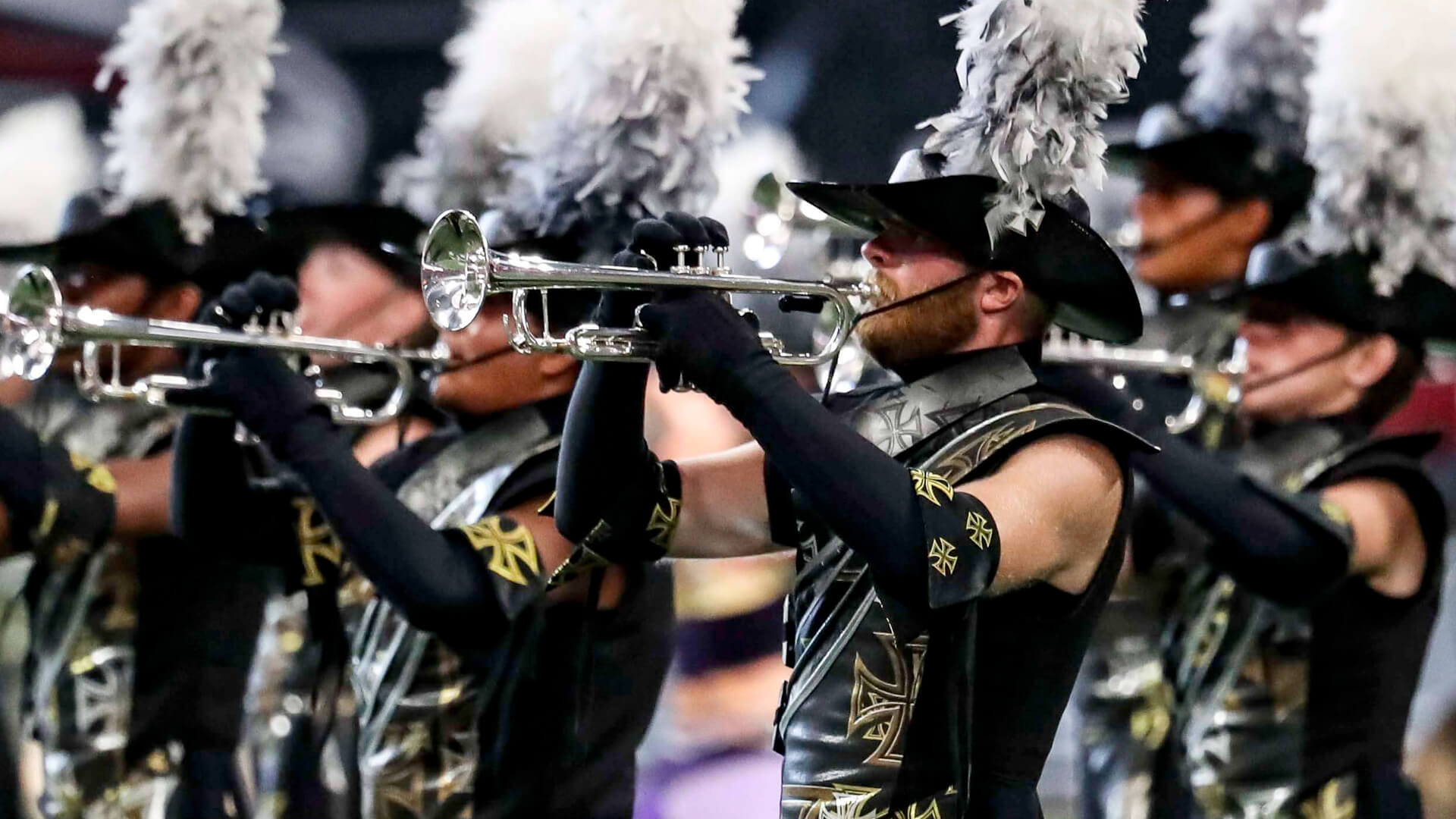 Crossmen’s solid distance from Spirit of Atlanta and The Academy remained intact, with the San Antonio corps keeping itself firmly within the Top 12 as it stands entering August.

With its hometown showing, Spirit capped off a strong week, one that the corps opened by pulling all the way to within 1.35 points of Mandarins on Wednesday in Little Rock.

With its general effect caption scores leading the way, Spirit defeated the Academy for the first time since 2014, while also cutting its distance from 12th place by about two points compared to its finish a week earlier in San Antonio.

“Knowing that we would have an audience packed filled with Spirit of Atlanta fans really pumped us up,” Spirit drum major Aidan Lerner said. “That, in turn, pumped the crowd up more, back and forth back and forth.” 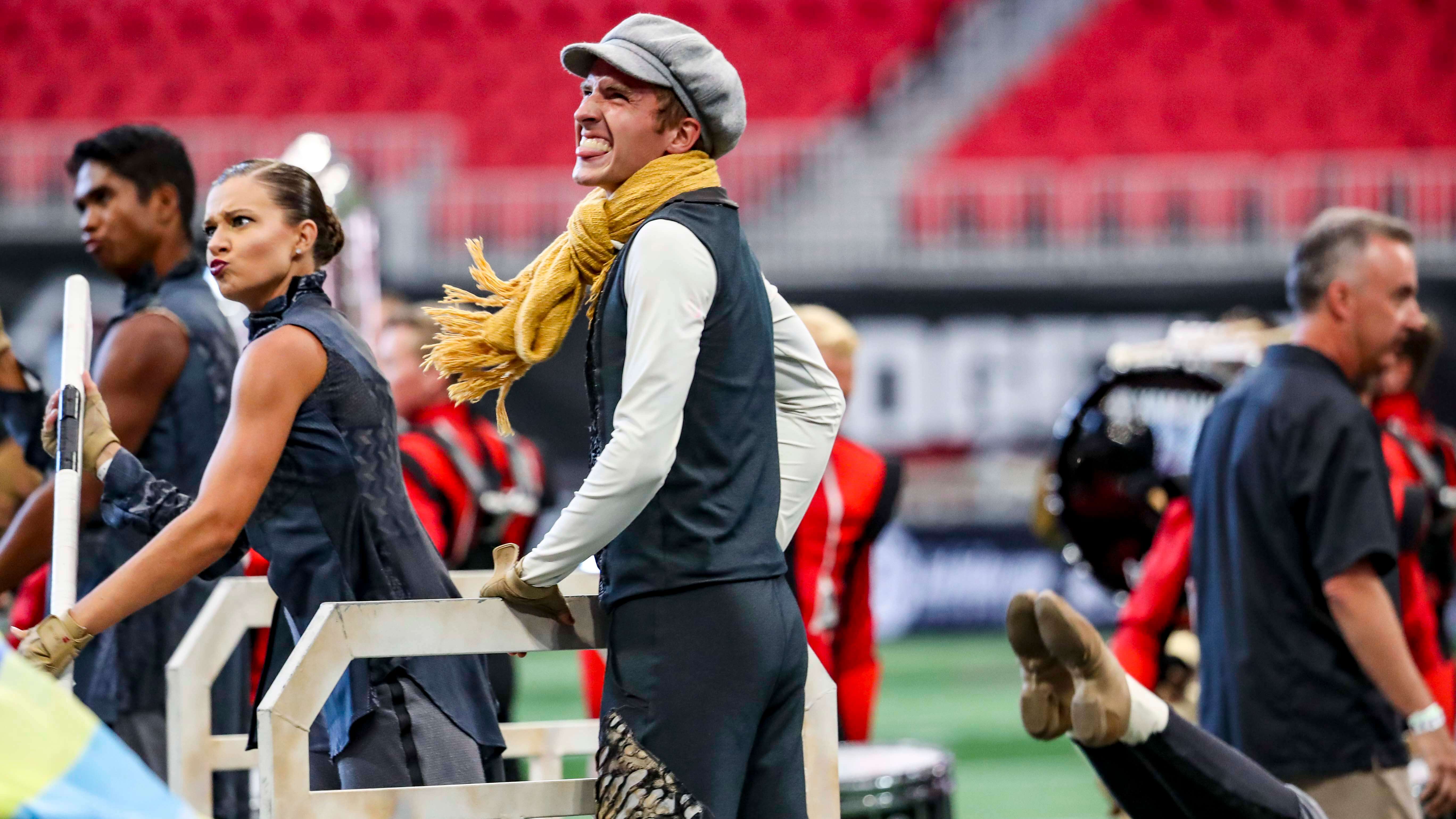 Colts continued their chase for a Top-15 finish with an impressive outing in Atlanta, pushing what had been a 0.85-point lead Friday in Dothan to just over a point ahead of the Madison Scouts. Saturday marked the third win in a row for the Dubuque corps against the Scouts.

For the Scouts, though, according to drum major Sean Hogan, the atmosphere surrounding the organization is optimistic entering the home stretch of the 2018 DCI Tour. The Madison corps increased its lead over Troopers to back over a point after seeing it drop to eight tenths in Little Rock.

“In our show, we have a variety of different emotions that we need to convey,” Scouts drum major Sean Hogan said. “But lately, we’ve been digging into, really, what each part of the show means to us. Seeing all of those people in the crowd, and just being able to pick one person and show all those emotions to them, really helps us hone what we want to do.” 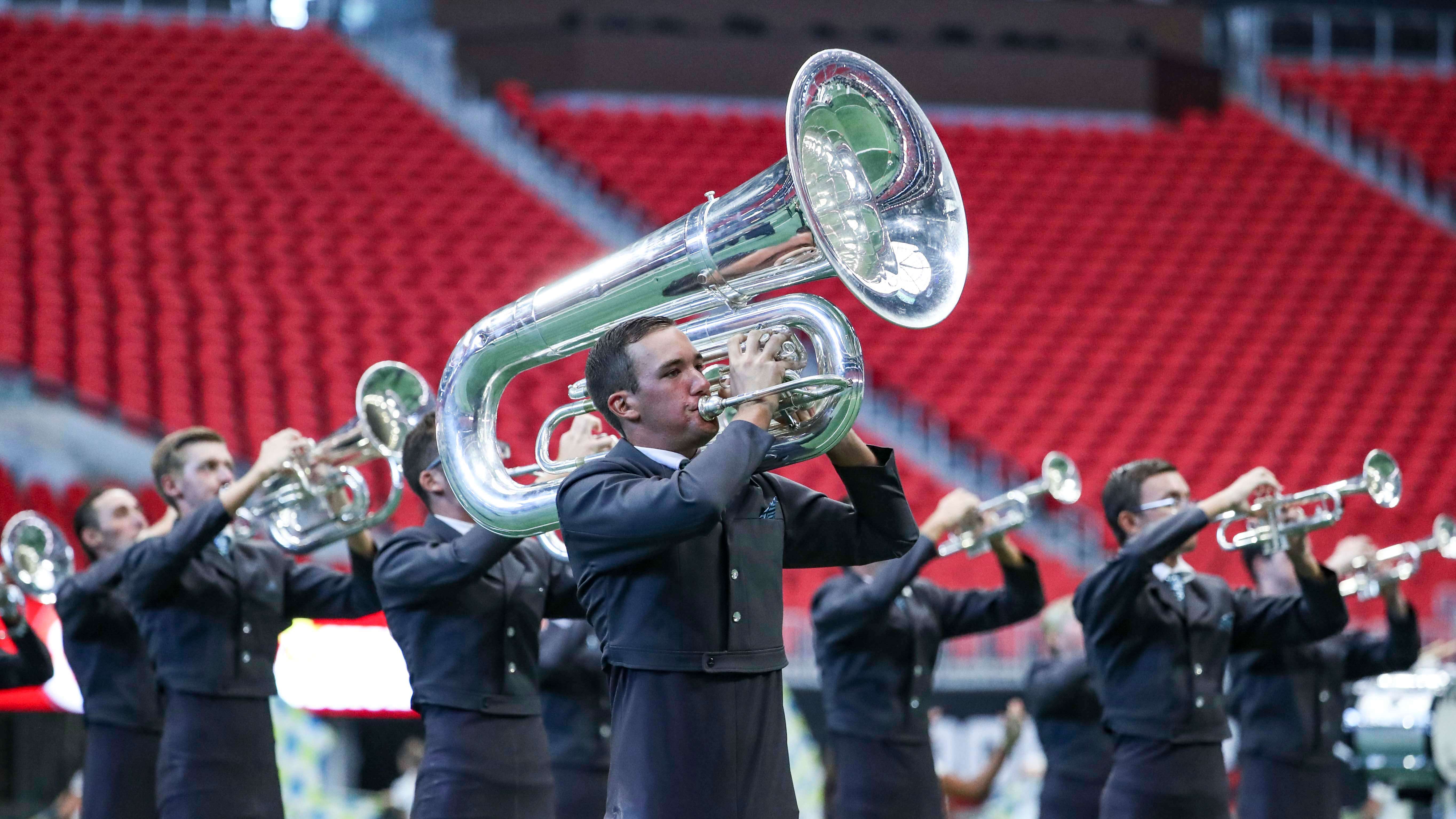 With its performance in Atlanta, Pacific Crest broke 75 points about three days earlier than it did a year ago. Music City made up decent ground on Pacific Crest from its deficit of 4.25 in Birmingham, but the southern California corps kept a strong advantage on its opponent from Nashville thanks to a commanding lead in general effect.

“Coming off the field, it feels really great,” Pacific Crest drum major Andrea Nordahl said. “We’ve been really hyping up this last week coming in here, coming off of our strong score from San Antonio, really pushing in order to make the same jump from last week.”

Genesis entered Atlanta having defeated the Oregon Crusaders for the first time ever Friday night in Dothan. While the two flipped in Atlanta, Genesis drum major Cameron Wilson said that his corps is in a good spot following several productive rehearsal days this week.

“We put in a ton of changes recently, really developing our show and getting ready for Championship Week,” Wilson said. “They really went out there and threw it down. We’re excited to show the world what we’ve got.” 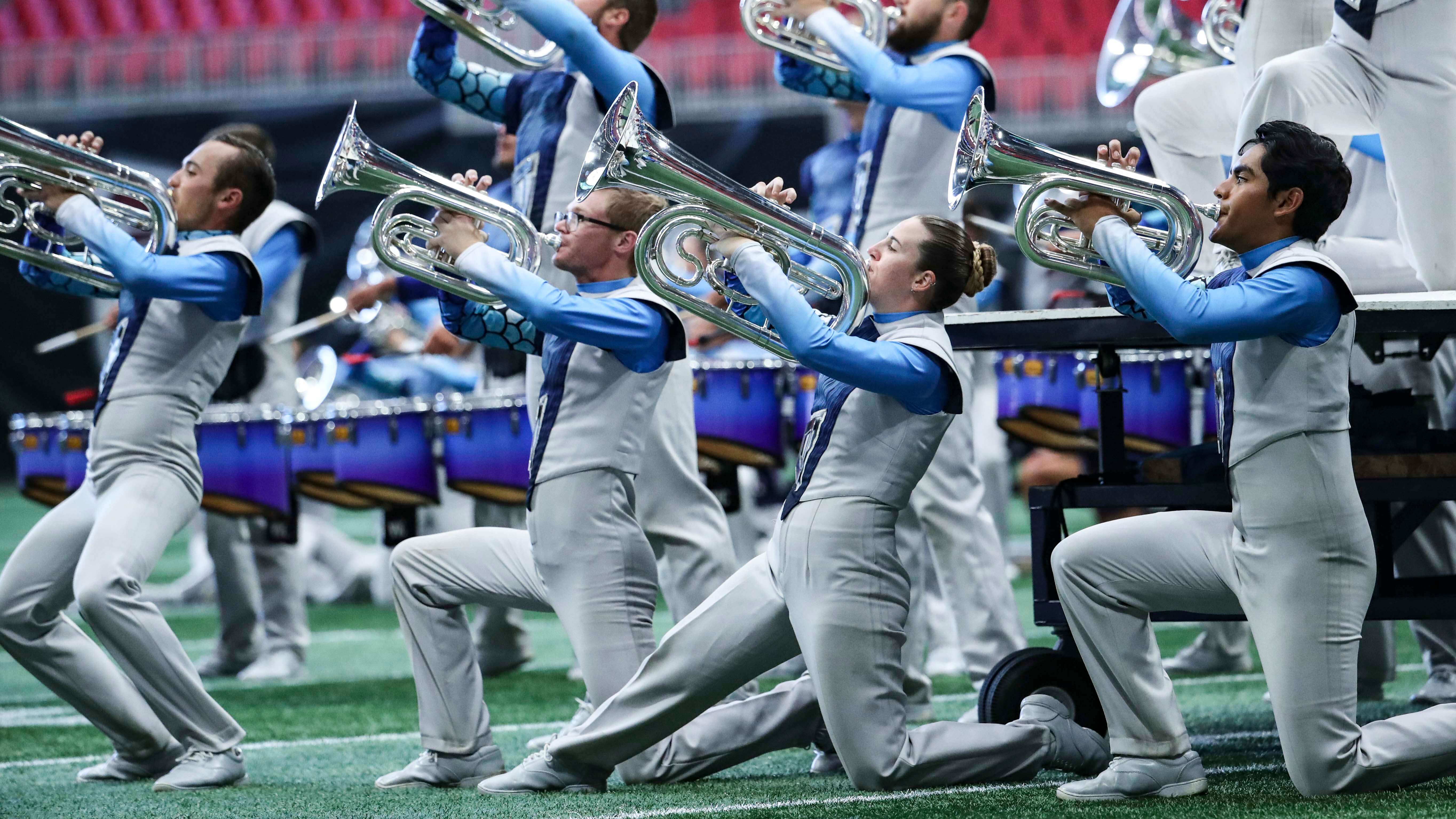 In San Antonio, Jersey Surf defeated Seattle Cascades for the first time since 2015 — by a tenth of a point — before doing so again by 0.15 Tuesday in Mustang, Oklahoma. After defeating the New Jersey corps by the same margin Friday in Dothan, Alabama, the Cascades built a bigger lead in Atlanta thanks in part to their impressive scores in total music.

Even so, Jersey Surf has been considerably closer to the Seattle corps than it’s been in quite some time. The two were within a point of each other just once in the past three years.

“They put their game faces on and they really went out there and gave it their all tonight,” Jersey Surf visual staff member Jeff Leager said. “They didn’t wait for tomorrow, they did it today.”

Pioneer also made up a bit of ground on its closest competitors, scoring a full point closer to Jersey Surf than it has at any point this season.

With the completion of this summer’s DCI Southeastern Championship, corps will begin making their way northeast for next weekend’s DCI Eastern Classic in Allentown, Pennsylvania, the last of 2018’s major regional events before the DCI World Championships kick off in Indianapolis.