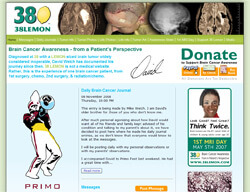 Two years ago this month, DCI.org ran an article about the courage of David Welch, a mellophone player with the Garfield Cadets in the mid-1980s. In 2004, at the age of 38, he was diagnosed with a lemon-sized brain tumor. Rather than retreat from the tremendous challenges related to his diagnosis, Welch confronted them aggressively, maintaining a widely featured and acclaimed blog, sharing with the world his struggle to battle the cancer that was threatening to take his life.

Since the creation of his Web site, 38lemon.com, Welch has educated and inspired countless readers about brain cancer and the medical advancements available for battling this disease. Throughout the ordeal, he has reached out to the drum corps community, and those who love drum corps have embraced him and helped to elevate his spirits.

Welch has not written any updates for his Web site since last Thursday. He has had a setback and is fighting to get back to what is normal for him. According to a blog entry by his brother, an MRI has revealed that his tumor has spread to both sides of his brain, and a few days ago his family enrolled him in hospice care.

Drum Corps International offers its most heartfelt thoughts and prayers to David, his family and his legion of loyal friends as they continue to confront these challenges.

Those touched by David's struggle and determination are encouraged to share their thoughts through his Web site, and his family and friends will share these postings with him.

Learn more about Welch's experiences as a Cadets member in his book "Middle Horn Leader."