Drum Corps International (DCI), the world leader in producing and sanctioning touring marching music competitions, will broadcast its dynamic and award-winning World Championship television program on ESPN2 for the second year this September. The television event is the second prime-time broadcast of the program on commercial television, and will be available to more than 88 million households.

"Drum Corps International is once again excited to bring the World Championship broadcast to the ESPN2 network," said DCI Executive Director Dan Acheson. "In airing this program on ESPN2 for the first time last year, we saw a national gathering of marching music enthusiasts who celebrated the achievements of the young drum corps performers, and we were overwhelmed with the response by those viewers. We expect to have even more tune in this year, while at the same time introducing a whole group of people to the marching arts with this national exposure."

The broadcast, which received higher-than-expected Nielson ratings in 2005 during its inaugural ESPN2 showing, will feature highlights from the 2006 World Championships in Madison, Wis. The highlights will be drawn from the competitive performances of the elite corps competing for the coveted Drum Corps International championship trophy. Included in the telecast will be "behind-the-scenes" features providing captivating insights, profiles and perspectives of this highly competitive display of world-class athleticism and extraordinary musical talent.

Visit the DCI on ESPN2 informational Web site at DCI.org. The site includes FAQ about the program, downloadable posters, ways for you to help spread the word, and more. 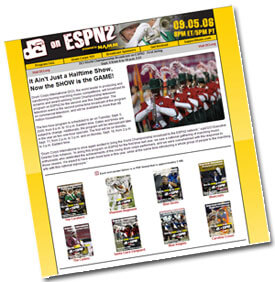