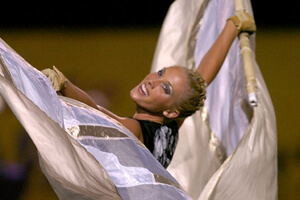 2005 Carolina Crown
Carolina Crown's seventh place "Angelus" show in 2005 explored the notion of angels existing among us, helping us not just get through life, but offering us a path to spiritual fulfillment that comes from learning to discover and trust the good in people and spirits alike. Trust was the overarching theme of the show; trust in the existence of angels, in their powers, in the faith they lead us to and in the belief that there's a better world somewhere and a better world for us here on earth. "Part I: The Messenger" commenced with Bob Kaufkin's "The Reason," addressing the spiritual presence of angels. The piece built up to a fanfare that had the arms of an abstracted angel reaching up to Heaven and ready to embrace us. Both that work and Kauflin's "A Mighty Fortress" were originally written for the Christian a cappella ensemble, GLAD. From the start of the show, one could see the numerals "444" positioned vertically on the right leg of the pants of the color guard costume and also horizontally over the left pocket of the jackets. Those who believe in spiritual numerology say 444 represents healing, blessings and messages from angels. "A Mighty Fortress," (not to be confused with the original melody of the same name by Martin Luther), soared with enthusiastic jubilation, quoting from the famous Luther tune at the end, amidst the proclamation of metallic sounds representing ringing church bells. In "Part II: The Appearance," singer/songwriter Sarah McLachlan's "Angel" revealed angel wings on the back of the guard's shirts, exposed when the jackets were removed. Brass players leaned against each other during the ballad and assisted each other in attaining sculptural positions not possible without having total trust in each other. The horns and drums ended the tender piece in an 80-yard wide representation of a pair of angel's wings, visually capturing the lyrics, "You're in the arms of an angel. May you find some comfort there."
2005 Carolina Crown performance excerpt.

"Part III: The Denial" was based on film composer Jerry Goldsmith's "Never Surrender" from "First Knight." This segment of the show was about doubt—in angels, goodness in the world and in our own abilities to fight past evil tendencies in others as well as ourselves. Two angels, one with white wings attached to her back and the other with black wings, expressed the hopes and fears of humanity as the people being protected by one and tempted by the other belted out the searing angst of the battle scene music. At the climactic pinnacle of the music, the black-winged angel was routed and forced to crawl off the field in defeat. "Part IV: The Acceptance" combined two works by symphonic composer Josepth Curiale; "Joy" from "Awakening" and "Call of the Mountain" from "Gates of Gold." Short snippets of "Angels We Have Heard on High" and "Hark, the Herald Angels Sing" were woven into the beginning of the triumphant piece, communicating the victory of good over evil. Four counts of Luther's "A Mighty Fortress" were also snuck into the mix, returning slightly later for a full-blown fanfare statement during a heroic push to the front in the corps' trademark block crown form. Amidst the huge angel wing flags that filled the field, the brass players ended the show in a giant "444," rejoicing in a final acclamation that angels are indeed present among us. This week only, you can save on 2005 World Championship Audio and Video Performance Downloads on the DCI Fan Network. Buy the 2005 Carolina Crown Video Performance Download. (Available this week only for $3.99. Regular price: $4.99.) Buy the Audio Performance Download bundle of all 12 Finalists from 2005. (Available this week only for $15.99. Regular price: $19.99.) Offer ends Monday, Feb. 27 at 8:30 a.m. ET.