Brandon Legnion, a 2006 member of Capital Regiment and music education major at Northwestern State University of Louisiana, sent this picture. 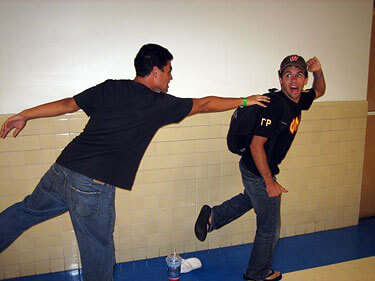 Something that many people might not have noticed about Capital Regiment's 2006 show, "Work, Rest and Play," is that we included a game of "Duck Duck Goose" in it. Andrew Cornwell (or Mitch as we all called him) is on the left, and I am on the right.

After the percussion break in the closer, when the horns came in, I jumped out of the form and went down the line tapping members on the head. I finally ended up at Mitch, the "goose." He chased me and failed, and then we fell back in line and finished the show.

This section, added for general effect, showed up for a few seconds on the DCI World Championship DVDs, but it might be unclear what's going on there.

This photo was taken the day of the DCI World Championship Finals before we left our last housing site. We had the day to ourselves, and we were having fun, reminiscing about good times. I hope you like it!