Scott Wolfe submitted the following. I like to think that I saw my first drum corps show live at what possibly could have been the best time ever. I had seen drum corps on PBS, but as we can all attest, it's not the same in person. So, I thought I knew what I was going to see. I had no clue! The show was in Dallas, Texas, late in July of 1988. We drove up to the stadium and I heard the loudest brass I could ever recall hearing (and my dad marched in the Ohio State Marching Band) to that point, and we were only in the parking lot. As we entered the stadium, my eyes must have popped out of their sockets and within me, a love affair was born. Not only were these guys loud, but they moved! And they were tight in their sound. The Madison Scouts were on the field for a clinic. We were able to watch ensemble rehearsal for a half hour or so before they explained some things and then told us they would do a full run of the show and invite us on the field. Of course the run through was just something else. Heart pounding, ears bleeding, and all sorts of senses assaulted. It was only 3 o'clock in the afternoon, and a full show was to come. Since I knew a little about DCI, I had read Drum Corps World and had gotten some score information. I went to talk to the baritone soloist in "Malaguena." As a baritone in my high school band, he was my new rock star idol. He allowed me to play on my first G bugle and encouraged us all to play loud and proud when we returned to our schools. I asked him who was going to take the World Championship that year. He told me without a thought that the Scouts would win. Now I knew that they were competitive that summer, but not thought of as contenders. I asked him, "Really?" I was expecting he'd say they hoped to catch Blue Devils or Santa Clara Vanguard, but no, he guaranteed a win. And sure enough we know how that prediction turned out. Anyhow, the show that night was something else. I got to see a championship show two weeks from it's peak, and we also saw Florida Wave (they were really cool) among the smaller corps there. Spirit of Atlanta grooved for us and then the Sky Ryders came out with their "Sound of Music" show. That is a show that ages well and was really quite fun. But best of all, it was the first show that night where I really knew the music. After intermission, the Velvet Knights hopped the fence and ran onto the field. Now this was a corps I could enjoy! They performed the show that I really have come to like the most of all their shows, "Magical Mystery Tour." The red high tops, corduroy caps and white dinner jackets—oh yeah! And I quickly stormed their souvie truck for a ball cap. I got the last one they had that night and had to sew the patch on the cap myself! And then the Scouts set the standard for every corps performance I have seen since. They wailed. They flat out wailed. That one show is responsible for my love of drum corps! Today, I play on my own G bugle. Of course, I got the drum corps bug real bad and decided I needed to be a macho euphonium player. No matter, I am marching with Frontier in the Drum Corps Associates circuit and loving all the stories of the vets. For what it is worth, I saw four corps mates perform in that show, which goes to show how small our world is. We are all family with one connection or another. 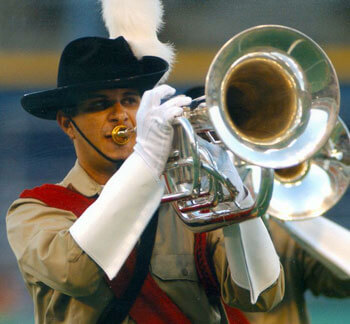 Robert (Bobby) Michaelson sent in the following. I was just reading your article about drum corps memories. I was surprised to see the article by Nancy Dingus. I was a member of the Kingsmen in 1982, even though it was only working on the equipment truck. She was a lifesaver for me when I started marching with the Velvet Knights. The next year I lived in San Diego and would spend the night at her house if I didn't think I could make the drive home from our drum line practices during the week. I have many more memories such as being at the show in Ankeny, Iowa, in 1983, watching Troopers perform as the sky behind became pitch black because of a possible tornado that was approaching. They broke into "Battle Hymn of the Republic" and it was awesome. But my favorite memory came as a member of the VK cymbal line in 1984 when we made finals for the very first time in corps history. Well, finally I would like to say "hello" to Nancy. I couldn't have made it through some of my times in drum corps without her and all of the other parents that supported us in doing what we all loved so much. We end with a submission from Rob Dunnington, a former member of Dutch Boy. As this happened some 32 years ago, I think any person who has had a similar experience can relate to our eight-day trip. This trip took place after the season was over in September of 1974. We landed in Munich, Germany, to perform for the mayor's soccer match. Not much of a performance — just once around a track — no big deal. They told us we were going inside the Olympic Stadium. A lot of us didn't think much about it until later. As I was one of the first and oldest corps members inside, I couldn't believe my eyes. There were wall-to-wall people. The stadium holds 80,000 soccer fans. We started walking out to the field and you could feel everyone tense up. When you are used to performing in front of 2,000 people and then you have something like this thrown at you, your whole attitude changes. As we started our show, nothing really happened crowd-wise until we finished our first song. The audience went nuts and things just got better from there. After we were done with our show and were trooping the stands, 80,000 people rose and chanted "CA-NA-DA, CA-NA-DA." Talk about feeling like William the Conqueror. That was an awesome feeling and one that we will never forget, ever! This trip was being planned for two years before we were told about it. It was planned through the German Department of Tourism and the corps. I think they saw us at Oktoberfest, and then asked our corps director if we would like to come over. It cost the corps a lot of money to pay for plane fares for every one, but it was well worth it. I'm not sure about this, but we might have been the first North American corps to go to Europe. Boo note: If Dutch Boy wasn't the first North American corps to perform in Europe, perhaps someone can write in about it for a future Fanfare column. Send your submissions by e-mail to boomike@dci.org.