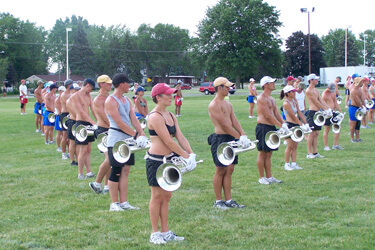 The first slideshow is from Phantom Regiment's camp on June 8. The corps was camped out in Winnebago, Ill., in the run up to their first show at the end of the week.

Phantom Regiment director Patrick Seidling was very encouraged by the progress the corps was making during the camp. "This time of year is always fun for drum corps no matter which corps you're with because there's so much promise and there's so much excitement and enthusiasm. There's just a ton of work going on, but you see so many quick results, so it's fun," he said.

The second gallery is from a Southwind rehearsal. The corps was in Alexandra, Ky., on June 12.