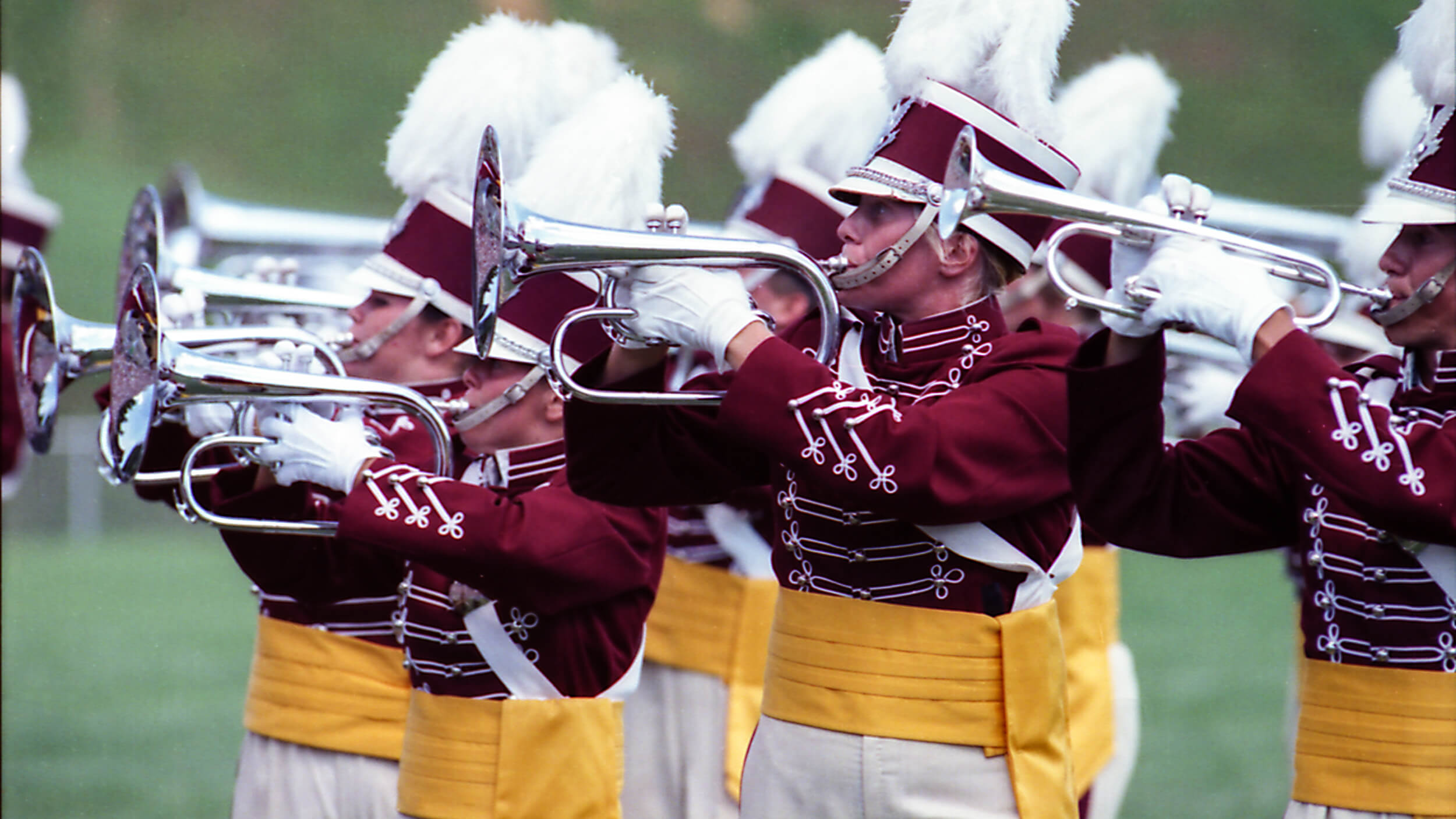 In 1985, the University of Wisconsin’s Camp Randall Stadium in Madison welcomed the Drum Corps International World Championships for the first of seven years.

Among the more memorable events of the season was sixth-place Suncoast Sound becoming the first finalist corps to perform an all-original music production, and 10th-place Star of Indiana making Finals in its first season, duplicating the feat achieved by Louisiana’s Bleu Raeders during DCI’s inaugural championship in 1972.

This year Garfield Cadets became the first World Class corps to win three World Championship titles in a row, a feat that has only been duplicated by The Cavaliers (2000-2002). 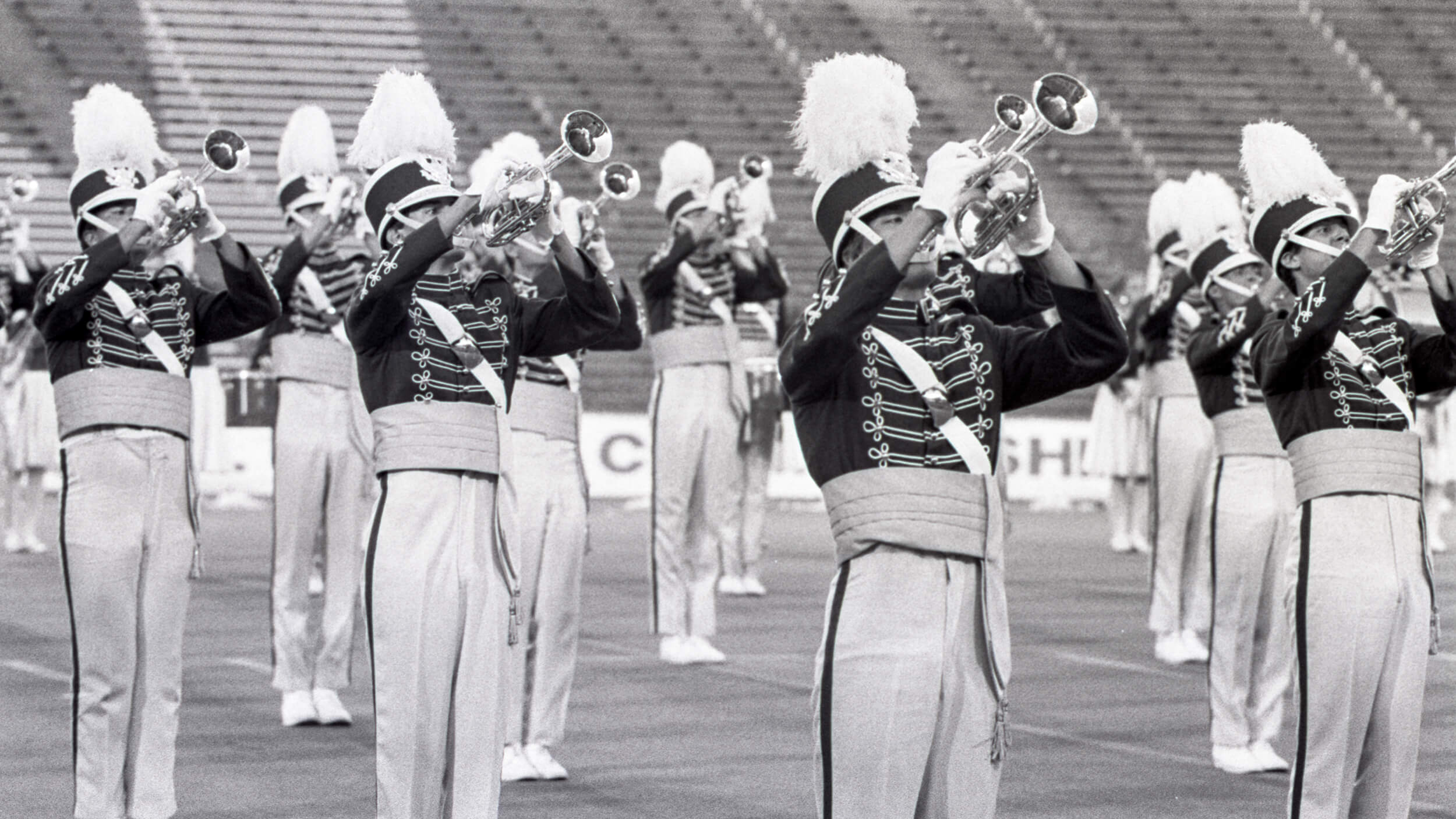 Cadets managed to take the 1985 title despite making massive changes to the corps’ visual drill formations during the month of July. Corps members threw out several minutes of the program in the closer and learned new forms and evolutions during a seven-day period interrupted by only one contest. It was perhaps the largest set of drill rewrites ever accomplished by a corps that was to go on and win the DCI title.

Watch the 1985 Garfield Cadets on DVD

Going back to a familiar composer, Cadets’ 1985 production featured all Leonard Bernstein music. In addition to being a composer who conquered both the concert hall and Broadway theaters, Bernstein was an accomplished pianist, a world-renown conductor who made more than 400 recordings with the New York Philharmonic, an author of numerous books on music appreciation, and a television personality whose programs—in which he analyzed music in terms the average person could understand—became standard film programming in schools.

The corps’ 1984 50th anniversary show also featured a Bernstein musical program, based on his “West Side Story.” And the 1983 show, the first in the three-peat, featured mostly music from Bernstein’s “Mass.”

From the last day of July through the week before the World Championships, Garfield Cadets lost five shows to the eventual second-place Santa Clara Vanguard. And the corps also lost two shows to Madison Scouts, a corps that would finish the season in fourth place

The corps’ opener featured Bernstein’s “Jeremiah Symphony” which pushed the boundaries of sophistication that was readily accepted by the audiences of the day. Along with George Zingali’s legendary flex-drill maneuvers, the music and visuals were cutting edge and a bit “out there” for some fans. The corps responded to that rampant innovation with a popular souvenir T-shirt that read, “It looks like art because it IS art.”

Bernstein’s “Symphony No. 1: Jeremiah” was written in 1942 when the composer was 24 years old, just a year before he first led the New York Philharmonic Orchestra on the podium. The three-movement symphony tells the Biblical story of Jeremiah, one of the major prophets of the Hebrew Bible, which is also the Old Testament of the Christian Holy Bible. The corps’ opener lasted for six-and-a-half minutes, the entire first half of the show.

At the beginning of the solemn first movement, “Prophecy,” members of the corps were scattered across the field, with some even starting off the field and running into position before the big musical hit delivered by the entire corps in a solid block.

The second movement from the symphony, “Profanation,” was based on a Hebrew song used on the day of Sabbath. Its angularity and occasional random horn outbursts challenged the ears of an audience not quite acclimated to sophistication delivered with such profound intensity. The brass arrangement came from future DCI Hall of Fame member Michael Klesch who was in his first year of arranging for the corps as a 23-year-old former Cadets drum major.

George Zingali’s drill during this first half of the show led an elderly friend sitting next to this author on Finals night to proclaim, “They sure do a good job of threading a needle.”

The second half of the show began with “Make Our Garden Grow” from “Candide,” a comic operetta by Bernstein that premiered in 1956 and was based on a 1759 story by the French writer/philosopher Voltaire. This piece is the finale of the operetta, when the two main characters sing about their realization the the simplest things in life are the most meaninful. White brochade shawls enwrapped the members of the Cadets color guard, contributing to the power of the work’s emotional simplicity.

The corps’ closer featured “Overture to Candide” which has perhaps the most frequent and tricky time signature changes of any symphonic work. Cadets’ arrangement commenced with a number of humorous sound effects from the front ensemble percussion section.

Watching the recording of the show, it’s remarkable that the corps was able to pull off so many drill changes in the closer. Forms constantly mutated as if drill designer Zingali was playing around with one of those small-beaded chains that attach pens to the counters at bank teller windows, and in fact, that’s exactly one of things he claimed to do for inspiration.

When the dust settled from the corps blazing across the Camp Randall Stadium turf, Garfield Cadets had earned their three-peat, a feat that has since eluded so many of DCI’s greatest corps.