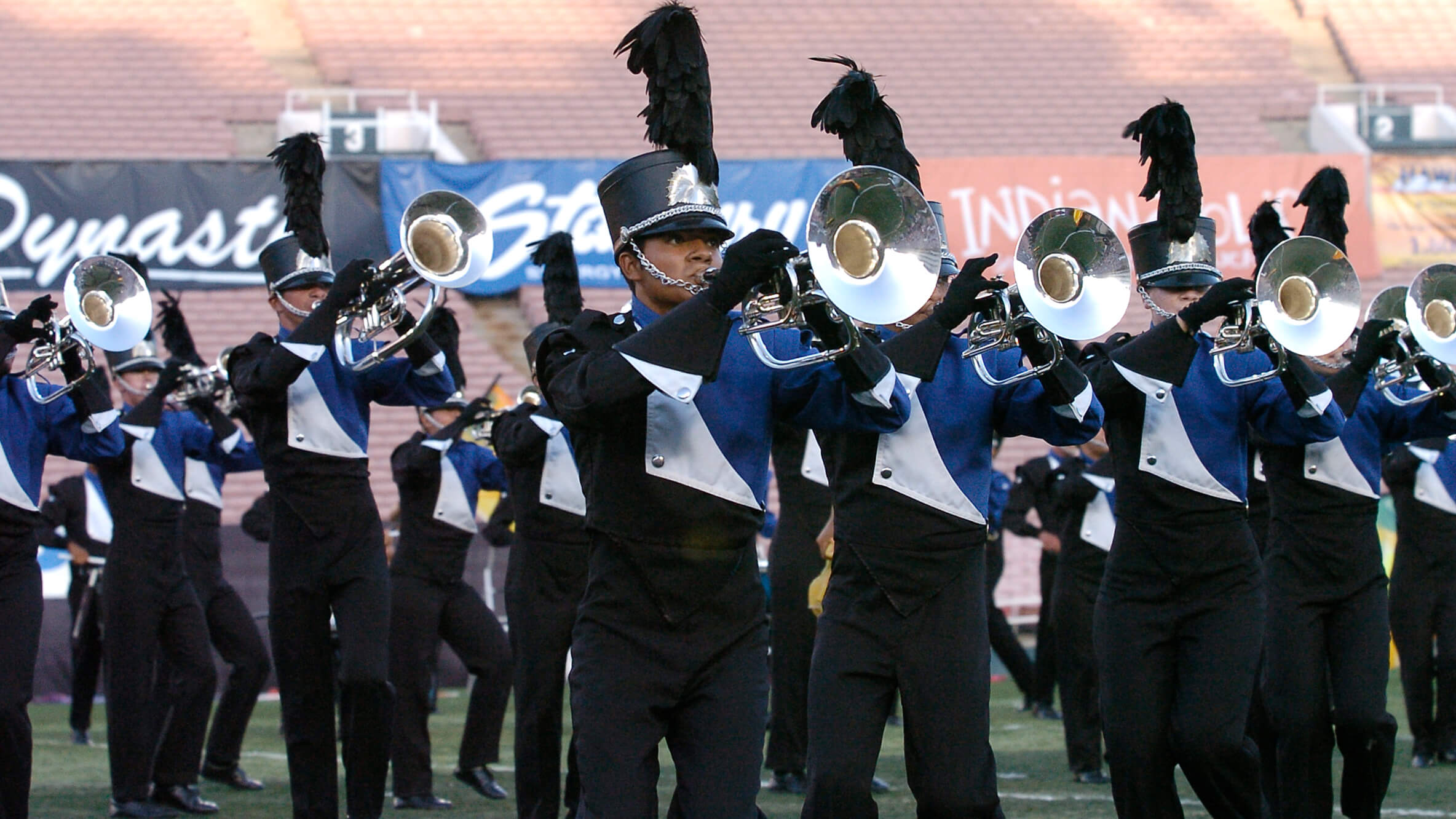 The 2007 Drum Corps International Tour marked one of the most interesting in DCI’s history.

For the first time in 35 years, the DCI World Championships headed west of the Rocky Mountains to the Pacific coast, with corps taking up residence at the historic Rose Bowl Stadium in Pasadena, California.

While Blue Devils celebrated the organization’s 50th anniversary by winning the title for the 12th time, it was the first and only time the corps has walked off the field after the last show of the DCI season in its home state.

But Blue Devils didn’t have an easy road to the top. In the Semifinals competition The Cadets were just five hundredths of a point behind the Devils and had beaten the California powerhouse twice in two previous shows by a combined total spread of 0.32 points. 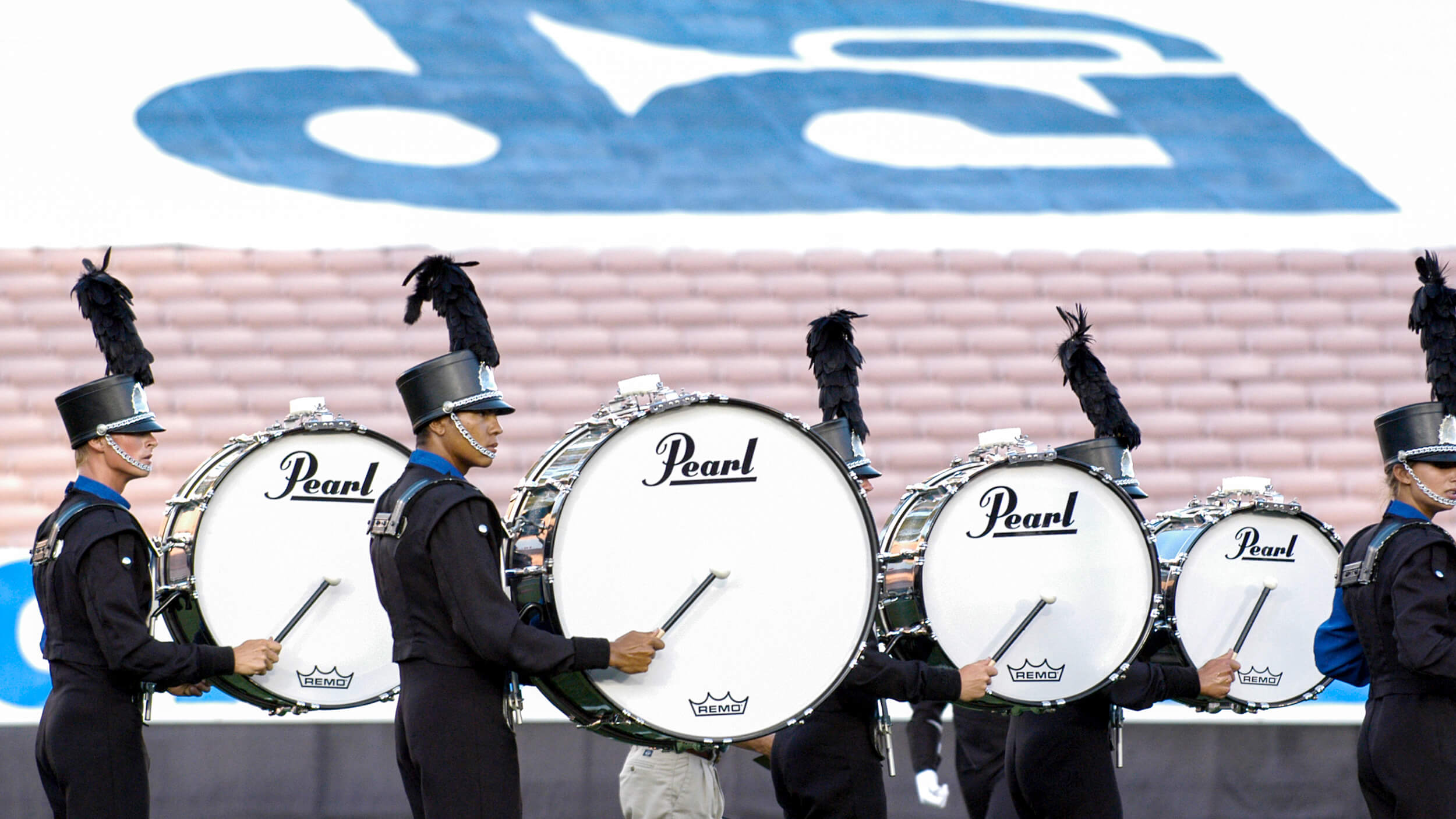 Blue Devils had also lost earlier in the season to The Cavaliers and even to the eventual seventh-place Bluecoats. In fact, at one point in the season, Bluecoats had beaten all six of the Division I corps that ended the season in one of the top-six positions, and finished the season only 0.125 points out of fifth place.

Blue Knights finished eighth with their production “Dark Dances,” based on Russian composer Dmitri Shostakovich’s “Symphony No. 10” of 1953 and his “Piano Concerto No. 1 (Concerto in C minor for Piano, Trumpet, and String Orchestra)” of 1933.

Melodies were often savagely cataclysmic and seemingly full of impending doom. It’s no secret that Shostakovich was quite a tortured soul, mainly due to he and his music being constantly under the scrutiny and criticism of the repressive regime of Soviet dictator Joseph Stalin, which was quite critical of modern music and more than once condemned composers and their creations. Shostakovich had even been declared a “non-person” when his music rubbed the regime the wrong way.

Kinetic body choreography peppered the Blue Knights production with unusual and unexpected movement, taking the corps’ unique approach and turning it up a few degrees. The production also featured a dizzying array of stunning hand-painted flags, another iconic visual practice from the Denver-based corps. The visuals appropriately enhanced the dark brooding nature of much of the oft-searing music.

The show commenced with the plaintive “Moderato,” the first movement of “Symphony No. 10,” with tubas slowly playing what seemed like a call in the wilderness that was gradually joined by the rest of the brass. As the unhurried melody built up in intensity, large flags of strips of pastel reds and purples sprung up, visually pushing the brass players into a company front that led into the brutal overdrive of impending doom provided by the symphony’s second movement, “Allegro.”

The work was premiered in the Soviet Union nine months after Stalin’s death, and that movement was claimed to represent the evil of Stalin’s personality and actions. The corps had previously played the first two movements of the symphony during its “Masters of the Symphony” production of 1998. 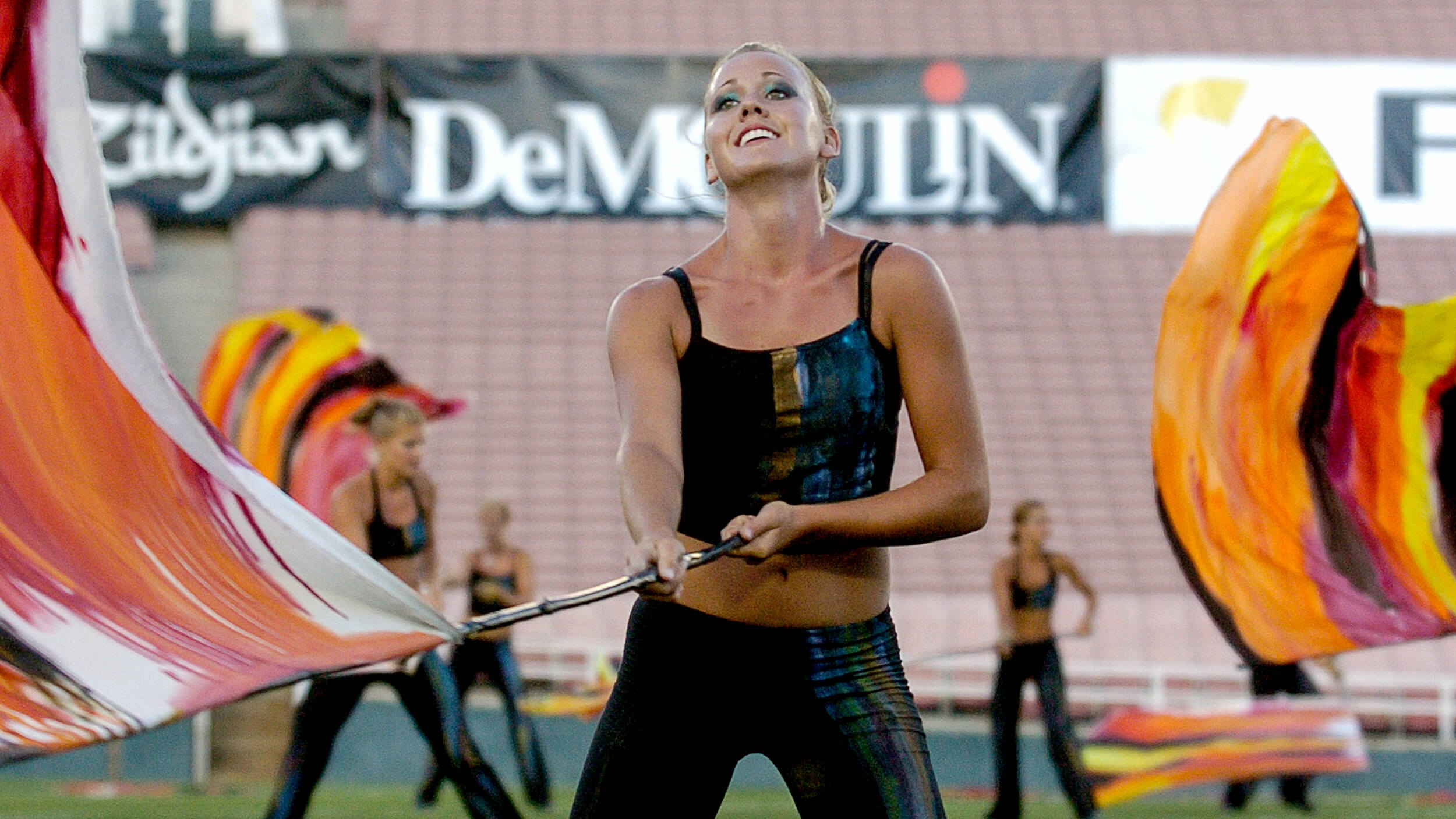 Flags of yellow were tinged with smudges of blood red and ochre, each flag different from the other due to being hand painted. This leading visual took the movement to a violent and angular end, with drill formations further expressing the angularity.

The corps provided a reprise from the sonic assault with the pensive “Lento,” the second movement from Shostakovich’s “Piano Concerto No. 1.” After the introduction, color guard members performed this segment without any equipment, relying on dance and choreography while the brass players often sat or stood in position. Near the start, some horns also provided arm extensions that mimicked the movements of the guard.

Overall, this movement was somewhat trance inducing, lulling the audience into complacency as the horns lined up diagonally across the right side of the field, facing backfield in anticipation of what was to follow.

A barrage of timpani outbursts led into a percussion feature, while horn players set down their instruments to engage in more choreography. This further evolved into the “Allegro” segment of the fourth and final movement of “Symphony No. 10,” the manic theme introduced by the mallet percussionists. Muted flags of strata of pinks and purples followed the music through Shostakovich’s hint of the violent melody of the second movement, but this time tinged with a little bit of hope, or more likely, defiance.

Similar flags smeared with red, purple, yellow, and black rose up for the final push of an exuberant praise of glory, grinding the previous sinister motifs into submission and offering a hopeful glimpse of light to those still quivering in the darkened shadows Shostakovich had so mercilessly expressed earlier.

From start to finish this production lived up to its title of “Dark Dances,” with music you could imagine hearing while sensing the trepidation of walking down a lonely darkened street at night, wondering if anyone or anything was laying in wait for one’s passing.