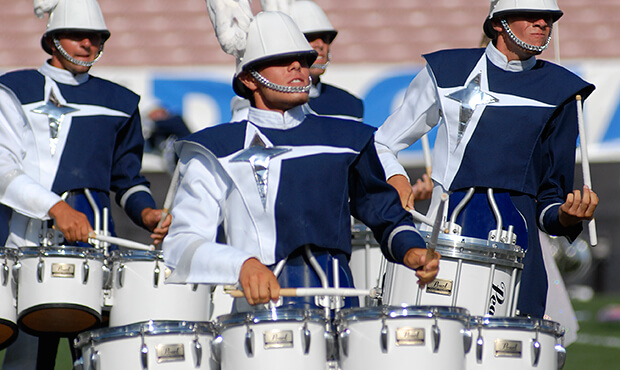 2007 Blue Stars
In 2007, the Drum Corps International World Championships went to California for the first time ever, taking up occupancy in Pasadena's famed Rose Bowl Stadium. After winning the Division II title the prior season, the Academy missed the World Class Finals by just under a point. Just over a tenth of a point behind the Academy was the Blue Stars in just the corps' second year back as a World Class unit since 1982. Blue Stars' 2007 production "Power and Grace" demonstrated that the previous season was no fluke, taking the corps to 14th place for the second year. The corps introduced new uniforms with one white pant leg terminating in a white shoe on the bottom and white on the corps jacket, and one navy blue leg terminating in a black shoe on the bottom and navy blue on the jacket. The two different colors allowed for some intriguing special effects when the brass and percussion players turned to either side. The corps still wore its white pith helmets, but the traditional red plumes were replaced with white that didn't visually jump off the helmets quite so much. The show started with a brief entry fanfare that combined two melodies of the first two works in the show. It was performed in back of the color guard members who were spinning vivid red flags. The front ensemble percussion section then played the main theme from Peter Tchaikovsky's "Swan Lake," a ballet based on Russian folk tales. The original production told the story of an evil sorcerer turning a princess into a swan and was premiered at Moscow's Bolshoi Theatre in 1877, instantly becoming one of the most celebrated ballets of all time. The serenity of "Swan Lake" was interrupted by the introduction to Igor Stravinsky's "The Firebird," written for the 1910 season of artistic director Sergei Diaghilev's Ballet Russes. The Parisian ensemble, which ran from 1909 to 1929, is considered the most innovative and important ballet company of the 20th Century due to its commissions from adventurous and cutting edge composers and artists. Besides Stravinsky, Diaghilev commissioned music from several famous composers as well as visual sets from the most famous contemporary artists of the day, including Picasso, Matisse and Coco Chanel. Blue Stars' "Power" section of the production was delivered in full force by the "Infernal Dance of King Kastchei" section of the Stravinsky work, a brutal segment that reveled in sheer volume. Befitting the King, royal colors of purple and blue were introduced to the color guard's landscape of red. Camille Saint-Sa?«ns' "The Swan" was all about "Grace," the title of the next section of the production, with the most lovely of melodies. The 13th and next-to-last movement from "The Carnival of the Animals" of 1886, it was originally written for solo cello with accompaniment by two pianos. It is the only movement from the suite that Saint-Sa?«ns allowed to be publicly performed while he was alive, and he would not allow the suite to be published until after his death, fearing the other movements were so frivolous they would destroy his reputation as a serious composer. 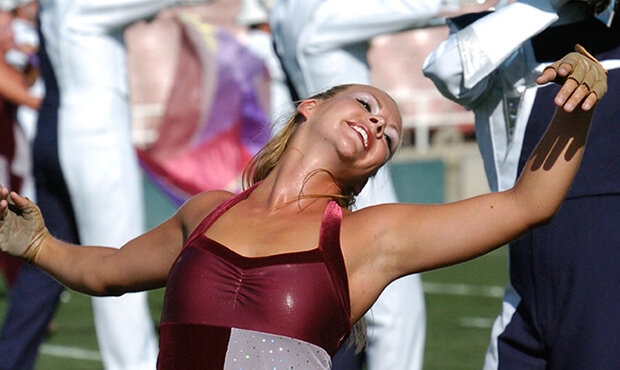 2007 Blue Stars
"The Swan" represents the waterfowl gliding serenely over the water. It's said the rippling arpeggios that accompany the piece—heard on the field played by a solo marimba—are the swan's feet moving under the water. Arcs of pastel pinks were added to the previous colors in the color guard's flags, softening the visual palette and highlighting the serenity of the music. Much of the piece was performed at a standstill, allowing the audience to focus on the beauty of the music. The ending, with guard members running to the sides of the field and horns in a large block, was one of the most euphonious-sounding moments of the year. A short-but-loud brassy fanfare shocked all out of complacency with yellow-orange flags reflecting the ascension of the re-born Firebird. "Swan Lake" then returned in the mallet percussion parts, followed by the grand finale to "The Firebird" in the horns. Mallet arpeggios outlined the ending of "Swan Lake" atop the brass section continuing the victorious "Firebird" theme. Translucent white and silvery flags, with one set of large fabric wings of white and faint purple stripes, further represented the soaring Firebird.

For this week only, you can save on the DVD that contains this complete Blue Stars performance, along with all of the 13th through 22nd placing corps at the 2007 DCI World Championships.