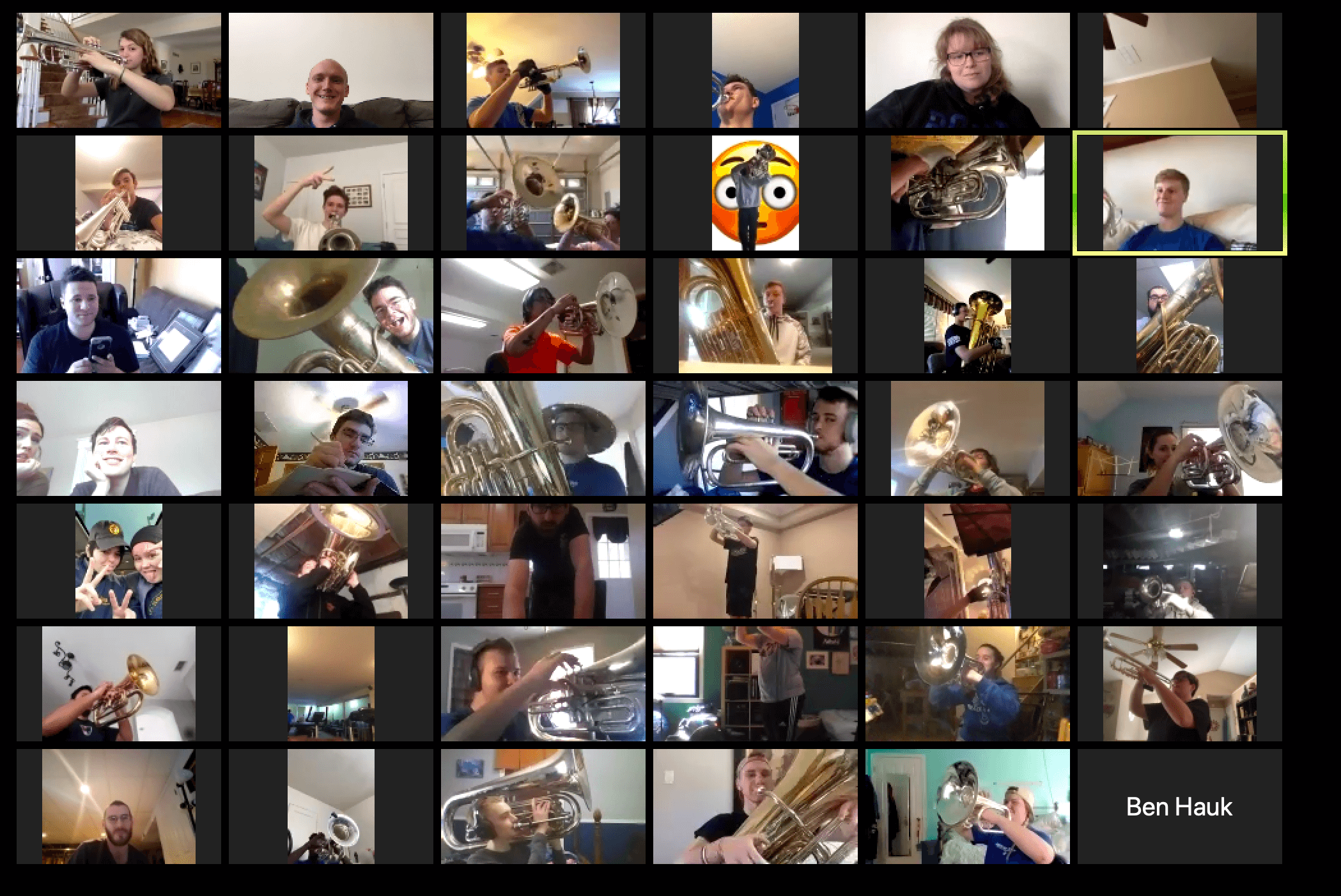 The evening of Friday, March 13, it was time for Jersey Surf brass caption head Chris Devona to get ready for the corps’ March brass rehearsal camp.

So, he got on his computer. He wasn’t in a school gym; he was in the comfort of his own home.

With recent cancellations to many events around the country due to the coronavirus, Jersey Surf improvised — making use of a plan that was originally in place to account for inclement weather — to make sure it was able to build upon the progress it had already made this offseason.

A virtual rehearsal weekend was the result.

“Logging on at first was very strange because you're planning to show up to rehearsal, but then you're sitting in your living room to do it,” Devona said. “Right off the bat, it's a little bit strange, but once once folks started logging in, then you started seeing the same faces who you see at camp; it actually settled in pretty nicely.” 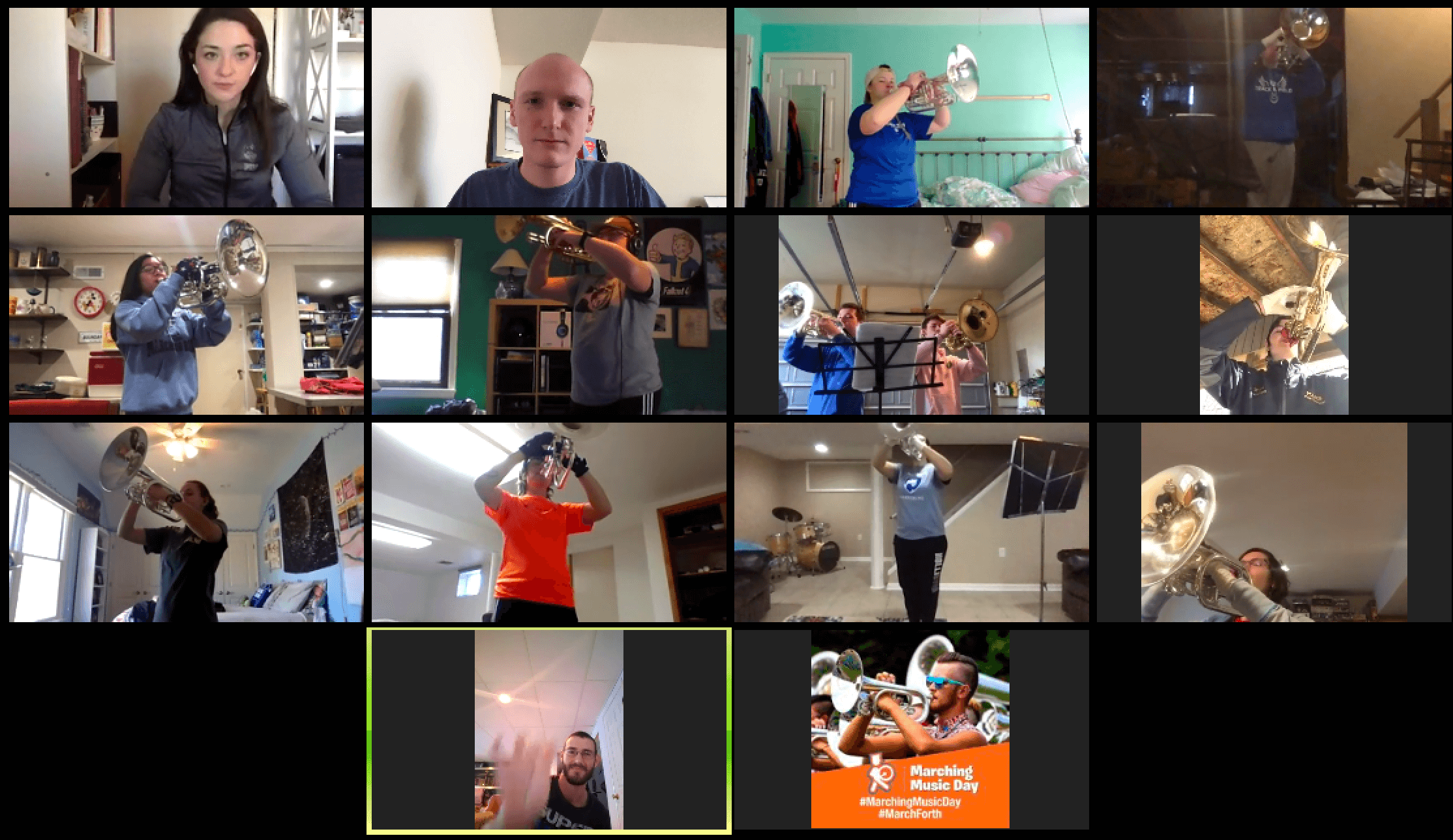 The MVP of the weekend camp? Zoom. The video conferencing software allowed nearly 70 individuals between Jersey Surf’s horn line and brass staff to participate in the camp, which consisted mostly of sectionals and private lessons.

The weekend started with a full meeting of the corps’ leadership on Friday night, and included various forms of instruction throughout the day on Saturday.

Sure, it wasn’t quite the same as a full, in-person camp. Horn line members weren’t able to play at the same time due to sound delay, but they could still play their parts one at a time and receive instruction.

With breakout video chat rooms, the horn line was able to even break into subsectionals, and spend 10-minute blocks in private one-on-one sessions with individual instructors.

“You can use the new features on the computer to mute all but one person or you can mute everyone while you play a metronome or while you do something, whatever you might do while they're playing,” Devona said. “And you have to use a little bit of trust that they are playing and they're evaluating their own sound.”

“It worked a lot better than I was expecting it to,” mellophone section leader Claire Auth added.

While an online camp certainly had its drawbacks, one very positive side effect of the unconventional rehearsal method was the level of attendance it induced.

Members who otherwise weren’t able to make it out to the camp were able to be a part of rehearsals from home, and didn’t have to worry about travel costs or logistics. Even one member from Ireland was able to make the “trip” to camp.

“We actually had one of the best attendances we've had for any camp in a few years,” Devona said.

Devona mentioned he was particularly pleased with the corps’ ability to handle the unusual situation, applauding the members’ professionalism throughout the process.

“They really focused in to make sure it happened,” he said. “And at the end of rehearsal, they really felt like they were able to make it a productive experience, just like the staff was. It was really one of those great moments in drum corps when you all put your efforts in the same direction. And at the end of the day, you end up with a really great result.”

But, based on recent momentum built by the corps, that’s no surprise. Surf experienced a standout season in 2019, moving into the Top 25 for the first time since 2014, earning its highest final score since 2009, and improving upon 2018’s final score by nearly six points.

According to Devona, the corps pretty much picked up right where it left off at the end of the 2019 season, between a solid audition turnout and a strong base of returning veteran members.

And at the March brass camp — despite truly unprecedented circumstances — it was on full display.

“Last year, the feeling was that it was never going to stop, and then when it did, we didn’t know what to do,” Auth said. “So we just kept working hard. And before we knew it, it was November and we were back at camp … It’s honestly so exciting to be a part of this group right now because everybody’s so excited to do better.”