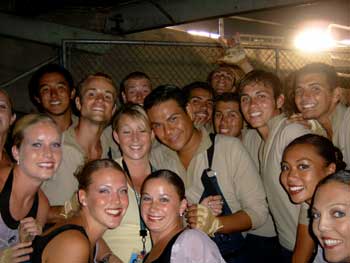 Lucy Howes sent this one in.

"Looking at pictures of other peoples memories made me want to have another look at my pictures from my summer on the road with the Blue Devils. I had the great honor of being given the opportunity to work in the Blue Devils food truck for eight weeks. "So, leaving England behind me at age 22, equipped with only a photo of the guy picking me up from the airport, I was to embark on the most
exciting summer of my life. "The people I met while I was there have made such a huge impression on me -- in particular the two ladies in the food truck, Carol and Sandy (one who could hardly walk a few years ago and the other with two brand new hips), who work so incredibly hard getting up at 6 a.m. and not going to bed until well after lights out. And Eldon, who drove the food truck. "These people would always have a smile and a joke no matter how little sleep they'd had. And I really cannot stress how hard these people work. But it's their love for the kids which always keep them going, no matter what! "These people are the people that you never forget. And the people that make it all possible. "So many wonderful memories: The girls and boys in the guard who would always laugh at my bad attempts at an American accent. Asking Scott Johnson exactly who he was and had he been involved with the Blue Devils for very long (very embarrassing, in hindsight). The guys in the horn line who let me ride the hound and experience a little of what it's like to b a "real" Blue Devil. Meeting the man of my dreams (well, maybe?). Oh, and my good friend Steve from home who made it possible for me to come on tour by being brave enough to do it first! "Thank you so much to everyone -- there are so many pictures, it's hard to chose, but the one that I have chosen is of me and the color guard at the Rose Bowl on the Tour of Champions, my last official show as water girl for the horn line (such a glamourous job!). "As soon as they saw the camera they all came running, and now I shall never forget any of them. Thank you guys -- you freakin' rock." Thanks Lucy!
E-mail your Forzato submissions -- and we will get to them all, in time (and we're posting them in the order they were received) -- to dave@dci.org along with where and when the photo was taken. Send some biographical information about yourself as well. We'll give you full credit. Also, let us know if you want your e-mail address included.