Name, age, hometown: Ryan Heith Couch, 20, Tampa, Fla. What corps are you in and what is your role this summer? I will be marching with the Kiwanis Kavaliers for a third season as drum major. Give us your full drum corps/marching music background. I started playing music in middle school as a saxophonist. I continued in high school where I was sax section leader for two years and marched in the marching band. After my freshmen year, I decided I wanted to be the drum major and followed out my sophomore, junior and senior years as drum major. I was also the Tri-M Music Honors Society member and president for two years. During and after high school I marched with the Kiwanis Kavaliers in 2002 as a contra and came back after a year off as drum major 2004 and 2005 What first attracted you to the drum corps activity? I remember I was at a summer band practice my freshmen year, and my director played the 1995 Cavaliers, which happened to be our show. I was completely amazed at what I saw and had to find out more. Well, to this day I'm still figuring it out and loving every minute. 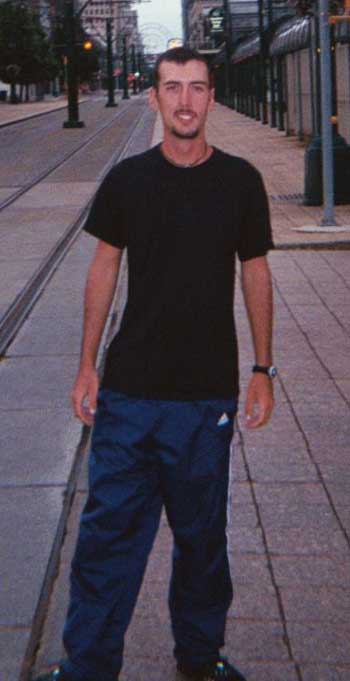 Ryan Heith Couch
What advice would you give to young people who want to march? Do not procrastinate. When I'm out talking to young kids, they're so amazed that most of them feel they can't do it or put it off. If you want to do it, do it. Dare to take a chance, because that's what a big part of this activity is all about. Do you have any favorite road anecdotes? Heh, my favorite is a morning of the Chicago July 4 parades in 2004. The corps arrived in the "wee hours of the morning" in the Chicago area and had very little floor time. Well, being the DM, I am the controller of the lights for the gym. So, I put the corps down and started reviewing the schedule for the next day as to know what time the corps needs to be up and off to stretch block. For a bit of cruel DM humor and payback, I turned on the lights the following morning, screaming that we all over slept and needed to be outside for stretch in five minutes. Not really, we were on time and there really was no stretch block. But man, if only you could have seen the members faces and how fast they got up and went outside -- to breakfast, of course. There's nothing like that! I'm still laughing. The last good book I read: Do college books count? Because I have no time to read books for fun anymore, so maybe my first biology book. The last great film I saw: "The Incredibles." I'm not too big of a fan of those animated movies, but you have to see this one. It truly blows away any cartoonish movie out there. Ha! Where I go to school and what I'm studying: I'm a sophomore at the University of South Florida in Tampa, Fla. I'm majoring in biology and minoring in anthropology. Jobs I have/have had: Being a drum major/student. I also teach at Countryside High School in Clearwater, Fla., as a visual instructor. Three CDs I'd want on a deserted island: Any AFI CD (grew up on it, can't live without it), Coheed and Cambria, "The Second Stage Turbine Blade"; and any one Thursday CD. My favorite TV show: I don't watch TV anymore, but if I did it'd be CNN or "Forensic Files." Favorite performers: One of the best live performers would have to be Davey Havok, lead vocalist from AFI. Absolutely incredible in person. He truly puts everything he has into what he does, and seeing him perform will leave you tired. Geoff Rickly and Thursday are phenomenal at one of their hardliner shows. How do you "blow off steam?" I hit things or scream. Not like a temper tantrum, but yea, that would be it. However, this side never comes out. I've been told I'm the calmest person some people have ever met! What has been your formative drum corps moment? Marching my first championship week in Madison (2002). Best drum corps show ever: My favorite, Phantom Regiment 1996 What are you most looking forward to about the summer? It's shaping up to be a great tour with great shows, great places and great people. Being on the podium again, hearing the corps progress. Best thing about being in a drum corps: Being able to travel and feel like nothing changes around you outside the corps. You see so many different people and places, but you're always doing that thing that is drum corps. Worst thing about being in a drum corps: If you get stuck in Michigan for a week and it decides to be winter instead of summer. A baritone player went to the hospital for hypothermia because of the freezing rain in 2004. You never know what you're up against as far as that goes. During tour, the best part of the day is: One of the best for me is having the short amount of time before the show where I go check in the corps with Raf, our assistant director. Being able to walk around and talk to fans, tour the show site, check out the field and all the other great times in between before warm up. During tour, the worst part of the day is: I hate those really hot days, not because of the sun but because of the hot water you have to drink that's been sitting in your cooler. Oh, and finding the shower in the "middle" of the locker room surrounded by chain link fence with only five shower heads. Alabama schools tend to be a little strange.

Favorite drum corps personality and why: The fans, they get so excited.

What I want to be when I "grow up": That information, I'm still figuring out myself. Hopefully fulfilling my forensics dream.

Describe what you think a typical DCI show will look in 2015. I hope nothing will change. Some things are even scaring me now, why change something that's already a classic? Besides, that's only 10 years from now.