By Allison Owen The week has finally arrived. After almost three months of missing drum corps camps for winter guard competitions, it's time for me to make my way back to Memphis. This coming weekend we have a rehearsal camp and I can't wait. It's been a while since I've seen most of the corps -- I don't even know half of them now -- so I'm really looking forward to meeting some new members. We're learning more drill this weekend -- which is always something I enjoy -- so it's going to be a good camp in Memphis. 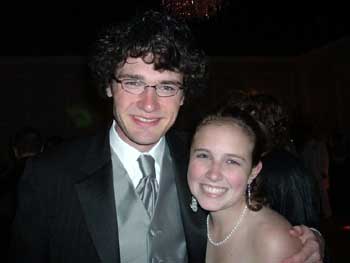 Taylor and Allison at prom
This past weekend was a sign of the end of the year drawing near: Prom. This was my first big event at Central, so I wasn't quite sure what it would be like. My night was definitely not what I was expecting, but I can now say that it's the most fun I've had in a long time. I think I'll humor everyone with my little adventure. Saturday I went to get my hair done. Now if you know me, this is really funny because I never do anything special with my hair. My hair is really difficult to work with, so I normally wear it up -- one reason why I love drum corps. So I sat there for an hour while Laura, the hairstylist, TRIED to make my hair hold a curl. I left with my hair as hard as a rock and a bottle of the very strongest hairspray on the market. Laura was so worried about it staying that she had completely drenched my hair in this hairspray. Surprisingly, my hair lasted through almost the whole night. Then I went home to work on my 10-page psychology paper that is due on Tuesday. I know that's not exactly a normal pre-prom ritual. But after a while of working on that I had to get ready. This time was one of those moments where I felt like I was in corps. Pre-show rituals became part of my new pre-prom rituals. My prom date, Taylor, showed up and we had to take pictures. That's another thing that those who know me probably know that I don't enjoy. I absolutely hate getting my picture taken -- unless it's during the summer when I'm really tan. I felt so completely pale the whole night. All these people go to the tanning beds and get all their artificial tans. I don't really see a point in that, personally, so I just dealt with my lack of dark skin and had a good time. After eating and other pre-prom activities, we headed on over to the country club. The first song that was playing when we got there was "Macarena." Now I don't know if you remember this song, but I know I sure do, and I remember the dance that went with it. As we scanned the crowd for our friends I came to an interesting conclusion. No one was doing the dance of the "Macarena" except for the band kids! I know this may sound weird, but I believe that those involved in the arts are different than those who aren't. I'm glad to be a band kid instead of a "normal" kid. For some strange reason it seems that those involved in the arts don't seem to care about if it's "cool" or not, but they just have fun. I am proud to be one of them.

We may have gotten some crazy looks at prom, but I had a blast. I got to know some more people from band and I had a great time. It was fun to hang out with people that starting in a few weeks, I won't see for a few months. Near the end of the night it started to snow. Yes, it is the end of April and I said SNOW. I'm not sure what the weather was doing, but in my 16 years on this earth I'm not used to it normally snowing in the end of April. So anyway, our group of band people left and drove slowly through the icy weather to Holly's house. I realized soon after that I was really tired. Since I got my hair done early I wasn't able to take a nap or anything. That reminded me of bus rides to show sites from the housing sites. I didn't want to lean my head against the seat too much in fear of messing up my hair for the show. After a few hours of sitting around talking, everyone decided to go his or her separate ways. Taylor and I were probably the last ones to leave -- other than those staying the night -- and this is where the true adventure begins. At sometime after 3:30 a.m., we stepped outside into the snowy April weather and headed to the car. As soon as we began to leave Holly's neighborhood, it began to snow like nobody's business. It was so bad we could hardly see the road in front of us. We found ourselves wondering if we were going home from the prom or a Christmas dance. Either way, we continued on our journey home at about 10 mph. Suddenly we just started sliding and the next thing I know we're sliding down a bank. There was absolutely nothing we could do but sit there and wait for something to stop us. We stopped when a beautiful blooming Dogwood tree -- that just shows you how this weather is crazy -- stopped us. It was pretty much surreal. Well, it was weird until we realized that the car was stuck to someone's tree at 4 in the morning.

After calling some people, one of Taylor's dad's friends came to get us. So while we waited, we listened to some of the Cadets 2000 show. That kind of distracted from the fact that a tree was holding onto the car. Luckily the car wasn't dead, so the heater was still on. Keep in mind that while all of this is going on, Taylor is in a tux and I'm in a strapless prom dress. Soon enough Jim pulls up on the side of the road and we climb our way up the snowy bank to the road. I think from now on whenever I'm wearing a dress and heeled shoes I will bring a pair of pants and some tennis shoes -- just in case something like that ever happens again. Once we made it up to the truck, we slowly continued on our way to his house. We were so tired and weirded out by the whole "freak snow storm" thing that we watched infomercials for about an hour or so before finally falling asleep. When we woke up several hours later it was still snowing -- although it wasn't sticking to the ground. I soon fell asleep again while Taylor and his dad went to go pull the car out. When they got back and I saw the car, I was actually pleasantly surprised to see that damage from the tree didn't turn out AS bad as I thought it would. After returning the tux and getting some food we went to my house. My plans of working on my psychology paper some more that morning/afternoon were completely changed by a wild act of mother nature. Prom became an almost 24-hour adventure that neither of us had anticipated.

Despite the crazy weather's occurrences, I had an absolute blast. And thinking about the whole experience, that weird accident sure makes an interesting story. We're pretty lucky that the nice dogwood tree stopped us from going further down into someone's trees. As bizarre as the whole night was, I know I won't soon forget it. I guess my life needed a little excitement before packing up and heading out to Memphis for the summer. Now I know for sure my school year is winding down and it's really amazing how soon corps time is. This week I'm off to New Orleans for a band trip, so that will be more fun times with some of my newly made friends. Then I'm leaving early to fly to Memphis for camp. I'm so excited to see everyone after much too long away. After a lot counting down, it's finally time for me to be back in Memphis and I'm really looking forward to it. This is the last camp before move-ins. Some days it feels like just yesterday that I got home from Denver, while others it seems like an eternity. Speaking of move-ins, that reminds me: I really need to go get some stuff together for corps this weekend. It also seems that it's about time to do a little tour shopping, so I'll let ya know how rehearsal goes next week. Allison Owen, 16, is a junior at Sullivan Central HS in Blountville, Tenn. She's in her second year in the Memphis Sound guard and enjoys dancing, writing, English, guard, photography, having fun and performing. For college she would love to attend the University of Oklahoma and major in journalism or English; however, she'll probably end up at the University of Memphis for in-state tuition's sake.