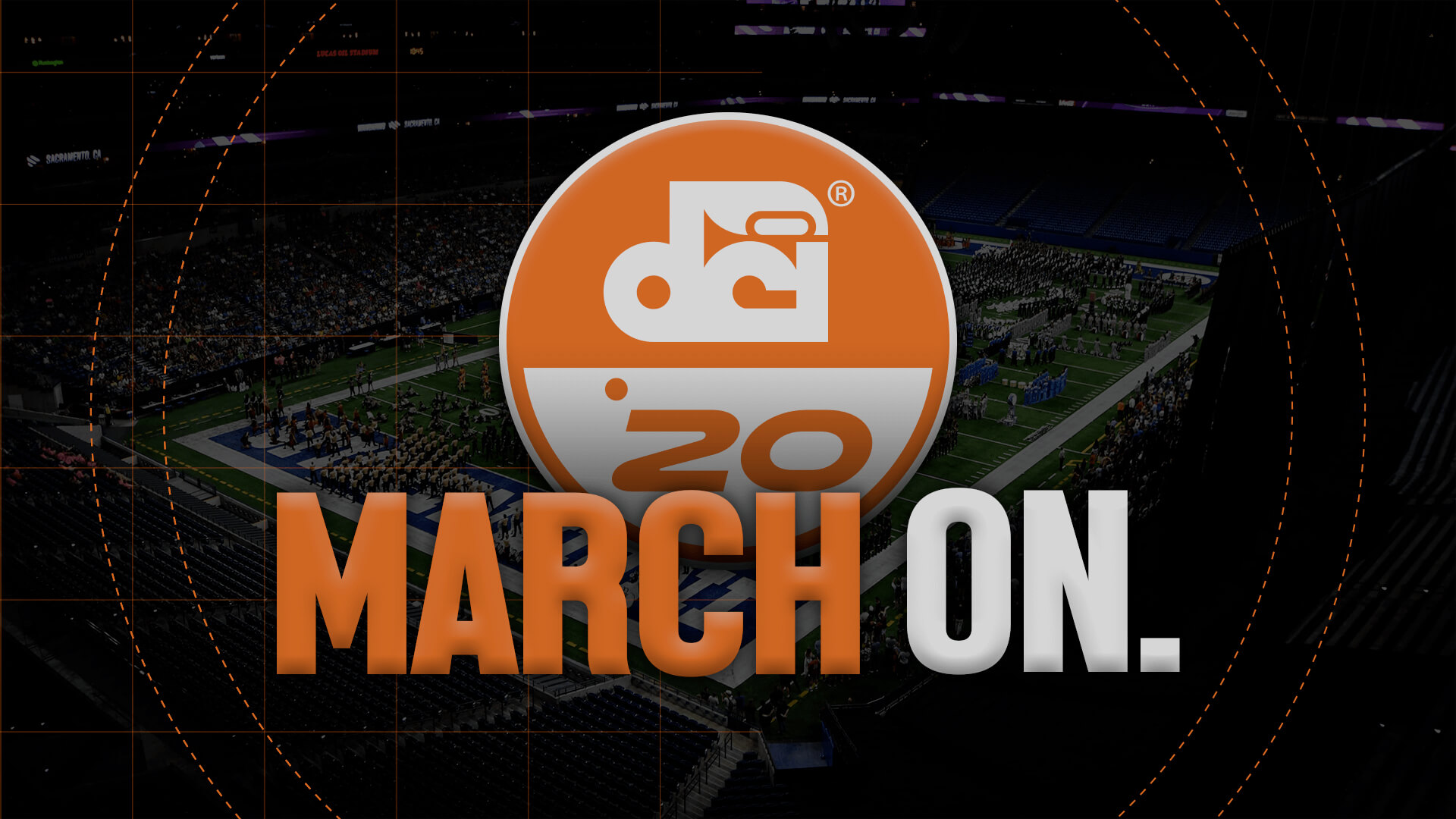 From coronavirus to K-pop, a countdown of the most clicked-on DCI.org headlines as recorded by Google Analytics that defined the 2020 calendar year. 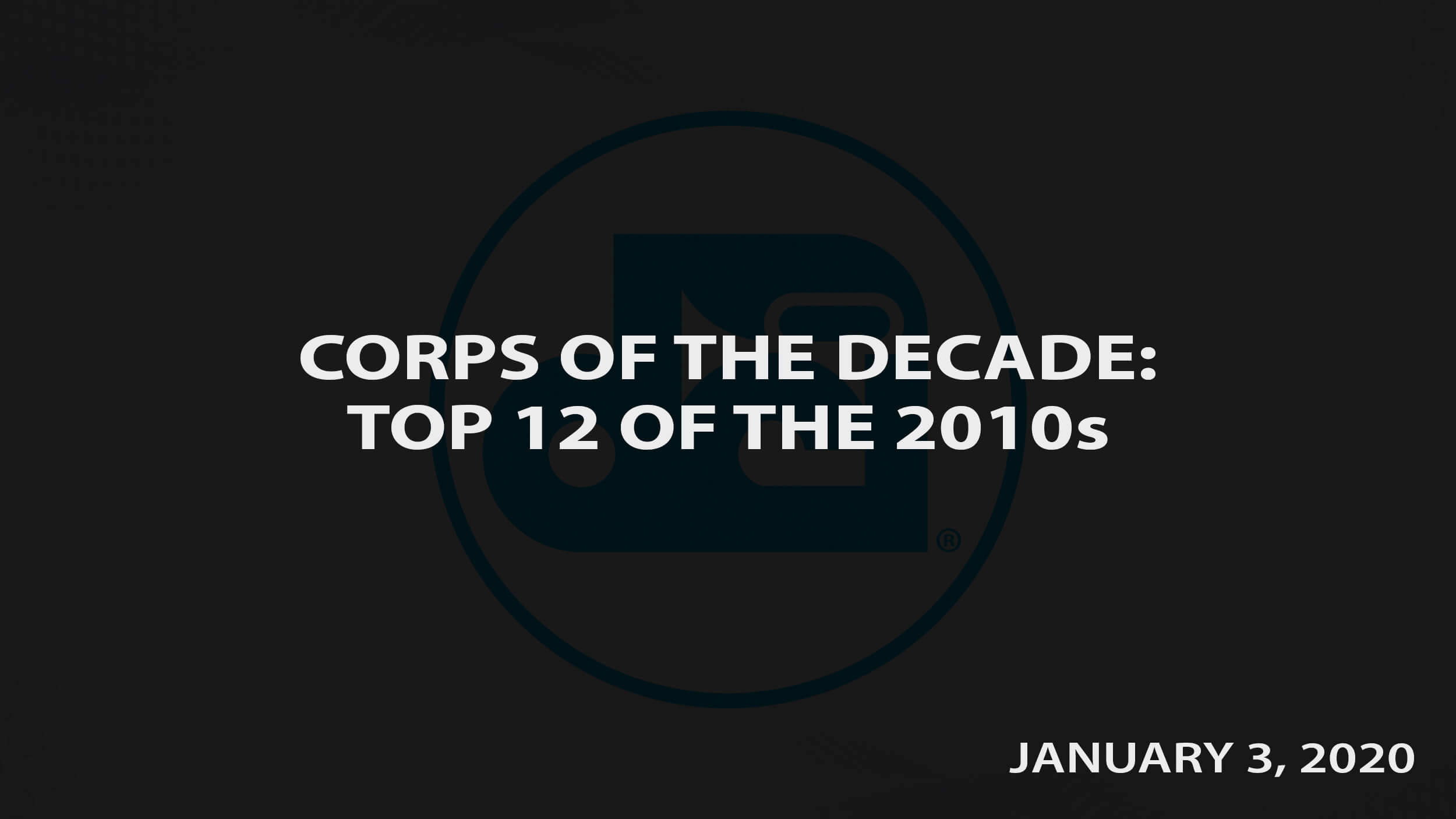 Wrapping up the final drum corps season of the “2010s,” DCI.org staff writer Jeff Griffith projected how the competition would play out if the last 10 years were one ongoing season.

Let's step back and say that the entire decade was one long season, and at long last, today is Finals night. Where do the chips fall? Let the DCI "2010s" Awards Ceremony begin… 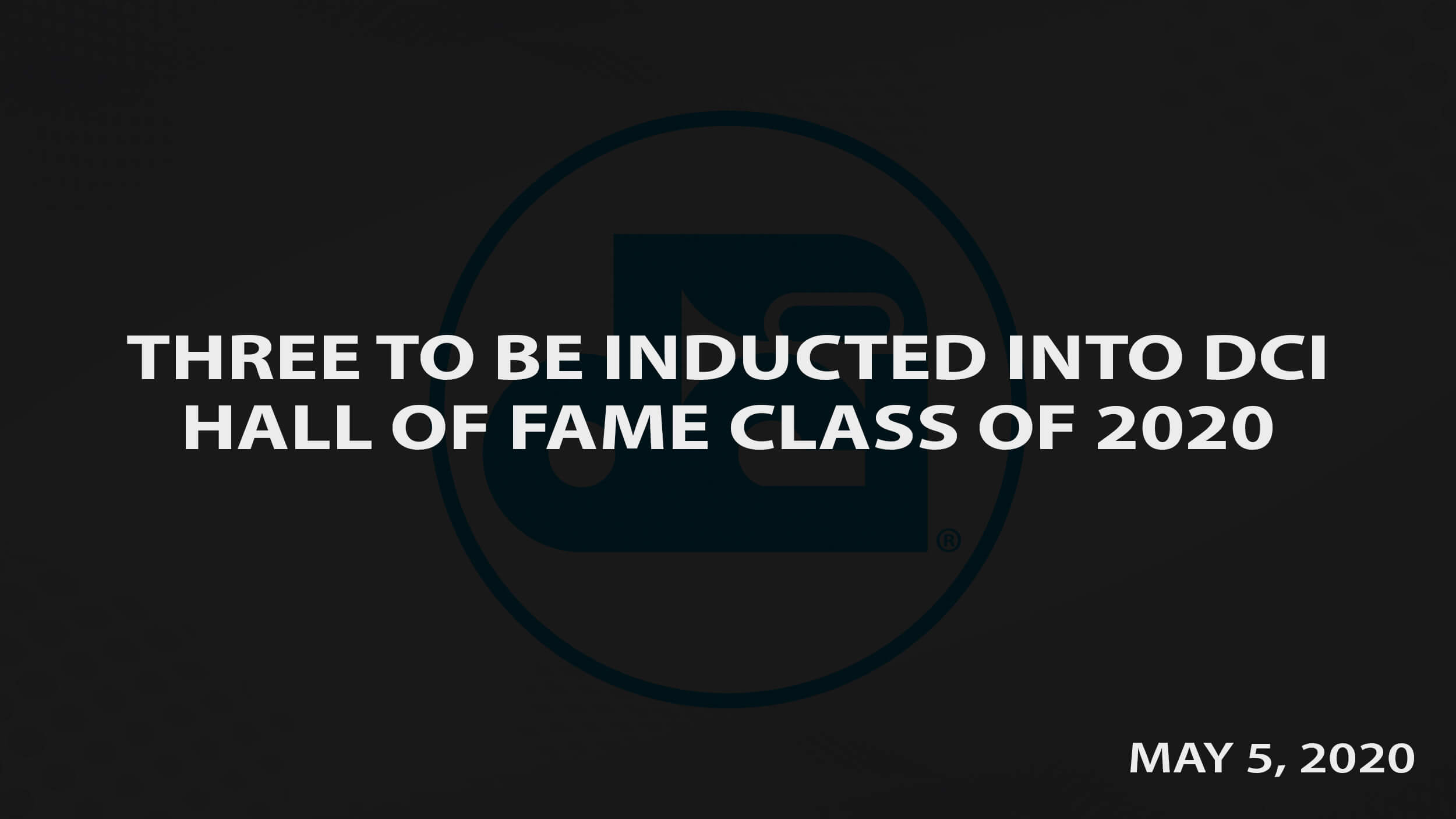 Later inducted as part of a virtual ceremony in August, Tony DiCarlo, Harold “Robby” Robinson and Sal Salas were announced as the newest members of the DCI Hall of Fame in the spring. 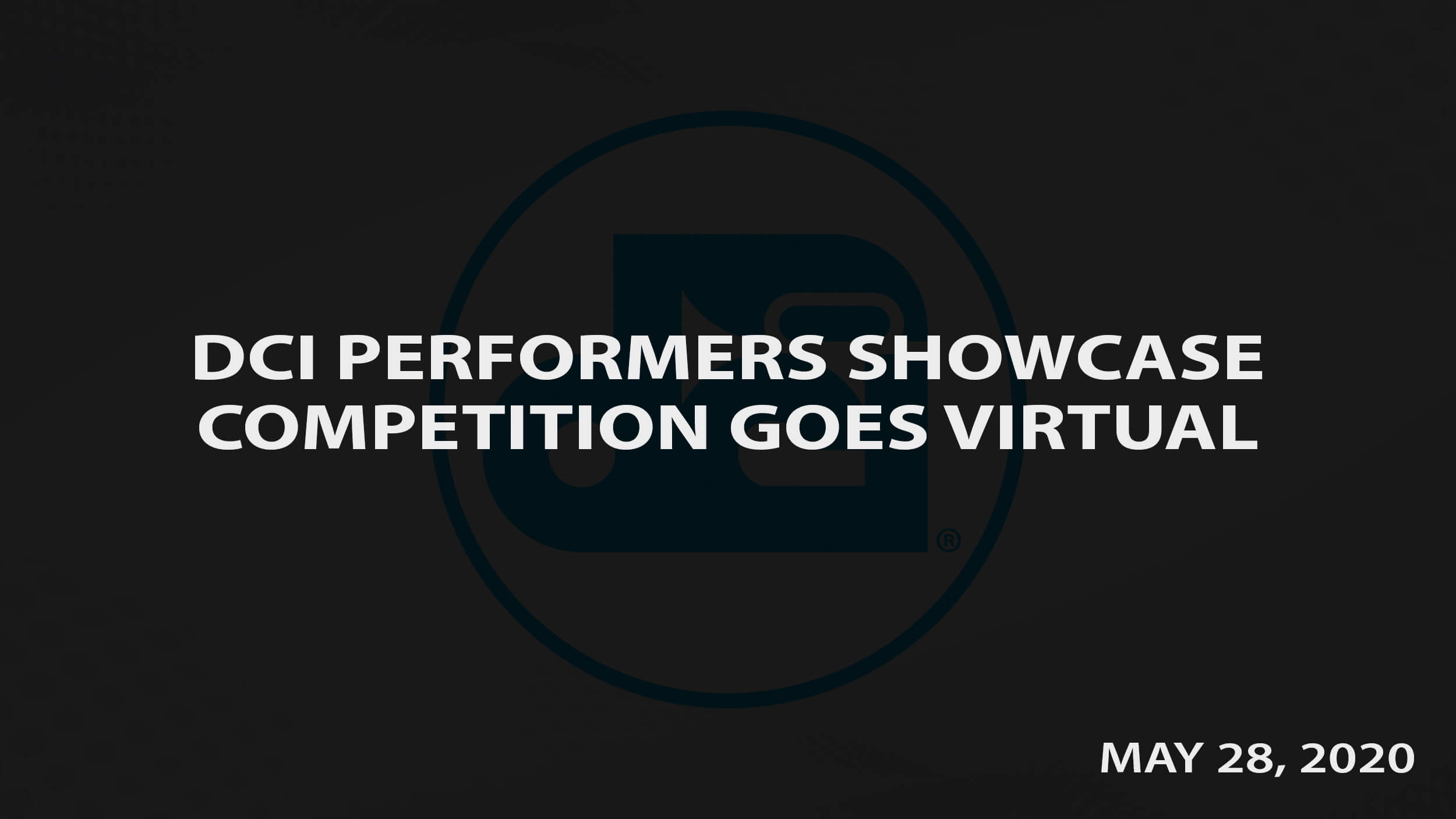 Drum Corps International’s longstanding Individual & Ensemble event got a virtual makeover in 2020, inviting anyone no matter age or corps affiliation to get involved with the popular competition.

“Bringing things online will give us an incredible opportunity to open this event to all ages and to individuals and ensembles who may not be active in or eligible to participate in a traditional DCI corps or SoundSport team,” said event organizer Christina Mavroudis. “Whether you’re in high school or college or part of an all-age or international music organization, the doors are wide open to get involved.” 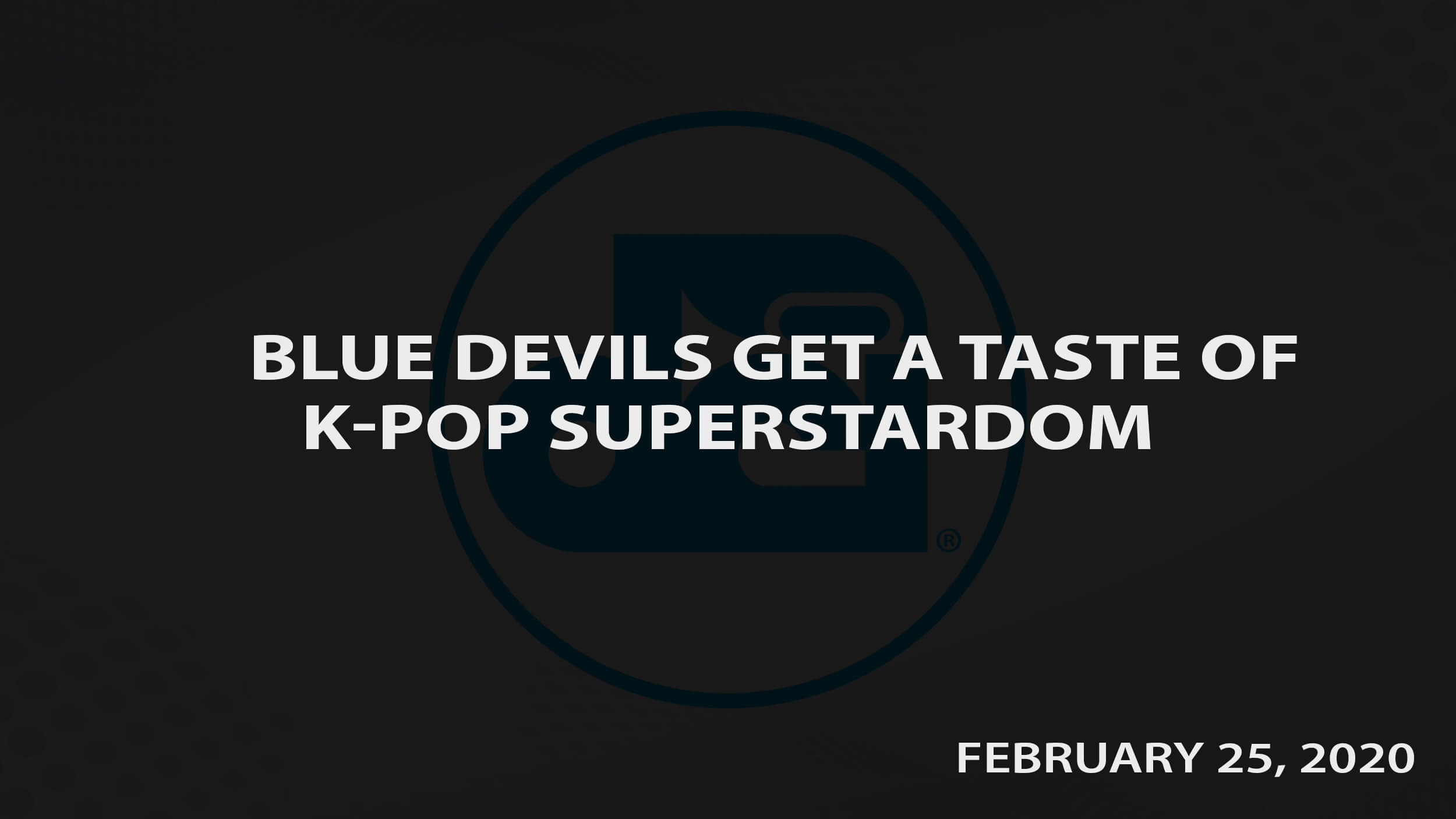 Blue Devils get a taste of K-pop superstardom

Just prior to the coronavirus taking over the news cycle, the Blue Devils’ BDEntertainment division was part of an incredible collaboration with Korean boy band BTS. The group’s music video for the song “ON” featured 12 BDEntertaiment performers who also accompanied BTS for a special performance as part of “The Tonight Show Starring Jimmy Fallon.”

Duos of snare, tenor, and bass drummers in addition to trumpets, trombones and sousaphones were involved in the project that came together in a relatively short amount of time. The outdoor shoot at Los Angeles’ Sepulveda Dam early in February was preceded by rehearsals at the end of January that Nadler said attracted the likes of singer Ariana Grande. 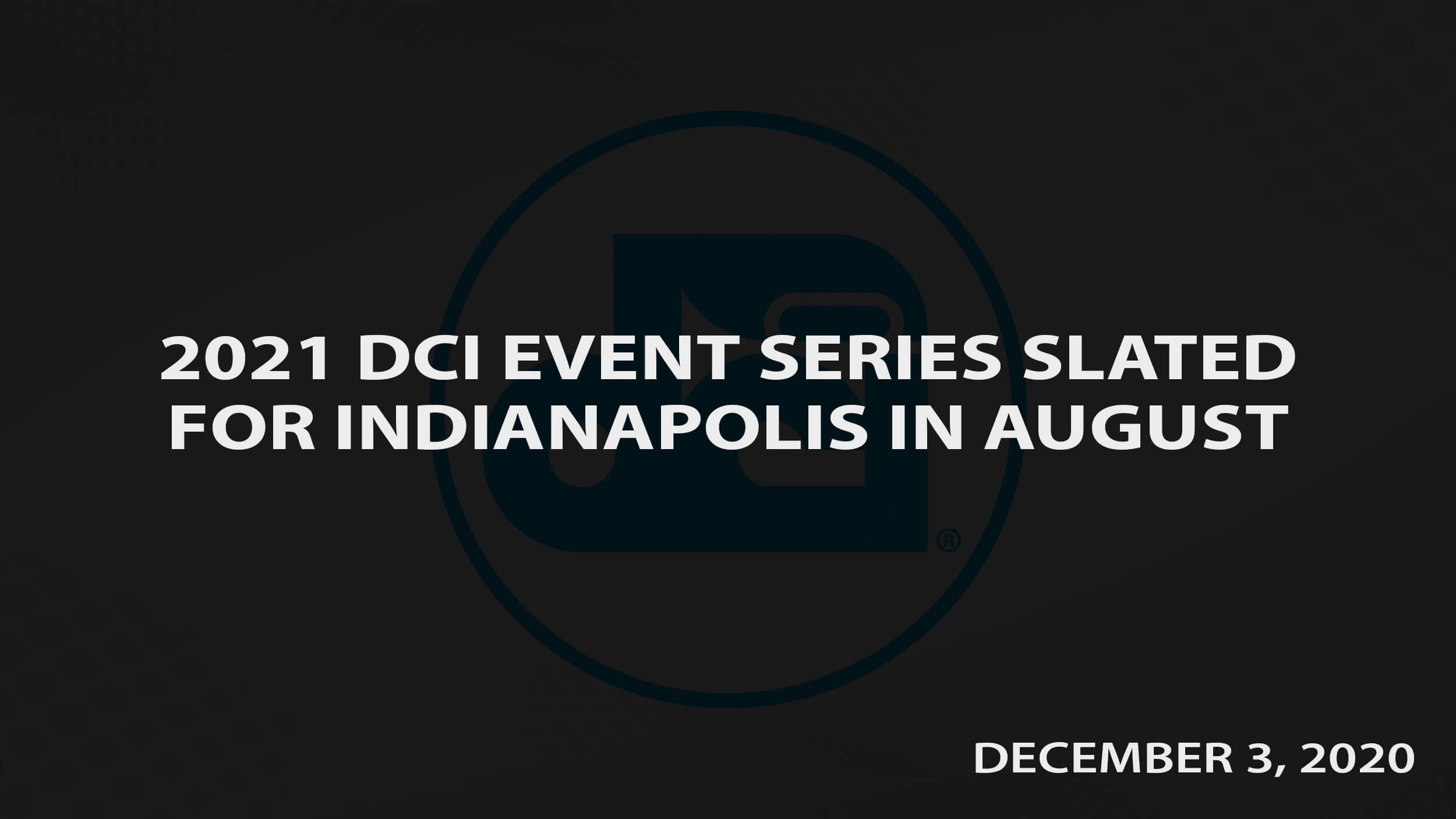 Under the guidance of the DCI Tour Re-opening Taskforce, a committee made up of a wide-ranging group of career professionals including those with extensive backgrounds in drum corps operations, medical and public health, news broke in early December that corps will gather in Indianapolis in August for a three-day event series that aims to serve as a “bridge” to Drum Corps International’s 50th anniversary season in 2022.

“The coming season will, by necessity, be ‘different’ to say the least; but we are determined to safely create a stage like no other in order to offer performance opportunities in the summer of 2021 as a ‘bridge’ to a tour in 2022 and the celebration of DCI’s 50th anniversary season,” Drum Corps International CEO Dan Acheson said. “Not only are we anticipating that the corps will offer an incredible experience for their performers in 2021, but we are confident beyond any doubt that fans who support our activity will be delighted by their performances.” 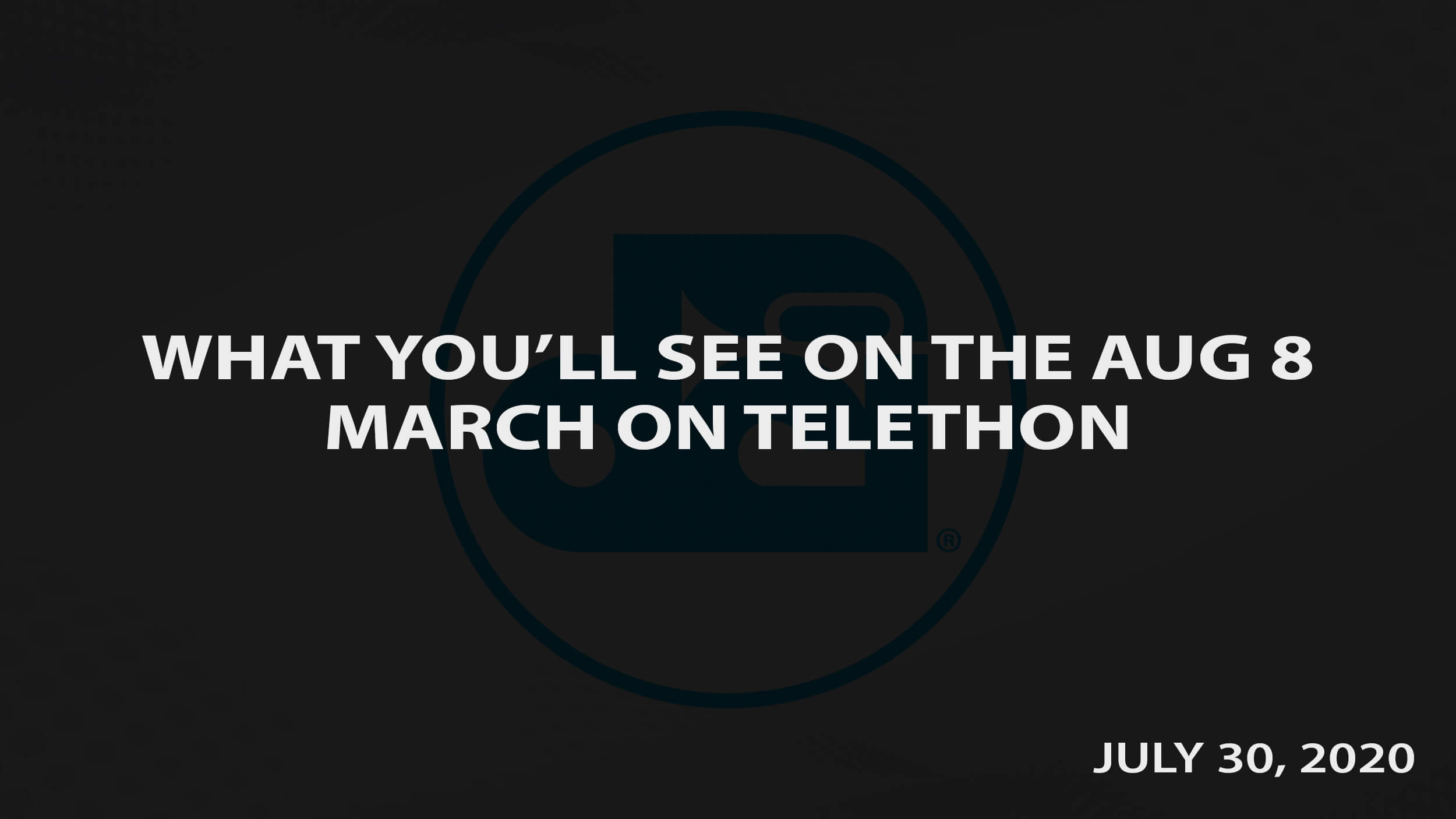 What you’ll see on the August 8 MarchOn Telethon

Hosted by DCI Hall of Fame broadcaster Steve Rondinaro, Drum Corps International brought the drum corps community together on what would have been the night of the 2020 DCI World Championship Finals to raise much-needed funds during the coronavirus pandemic.

On a night traditionally reserved for the spectacular season-ending, final competitive performances of the world’s most elite marching music ensembles at the Drum Corps International World Championship, the iconic performance stage within Lucas Oil Stadium will remain dark this year on the second Saturday in August … In place of the spellbinding sights and sounds of the thousands of remarkable performers taking their places on the field amidst the cheers of tens of thousands of passionate fans in the stands, DCI is instead bringing together members of the worldwide marching arts community in a unique global online event. 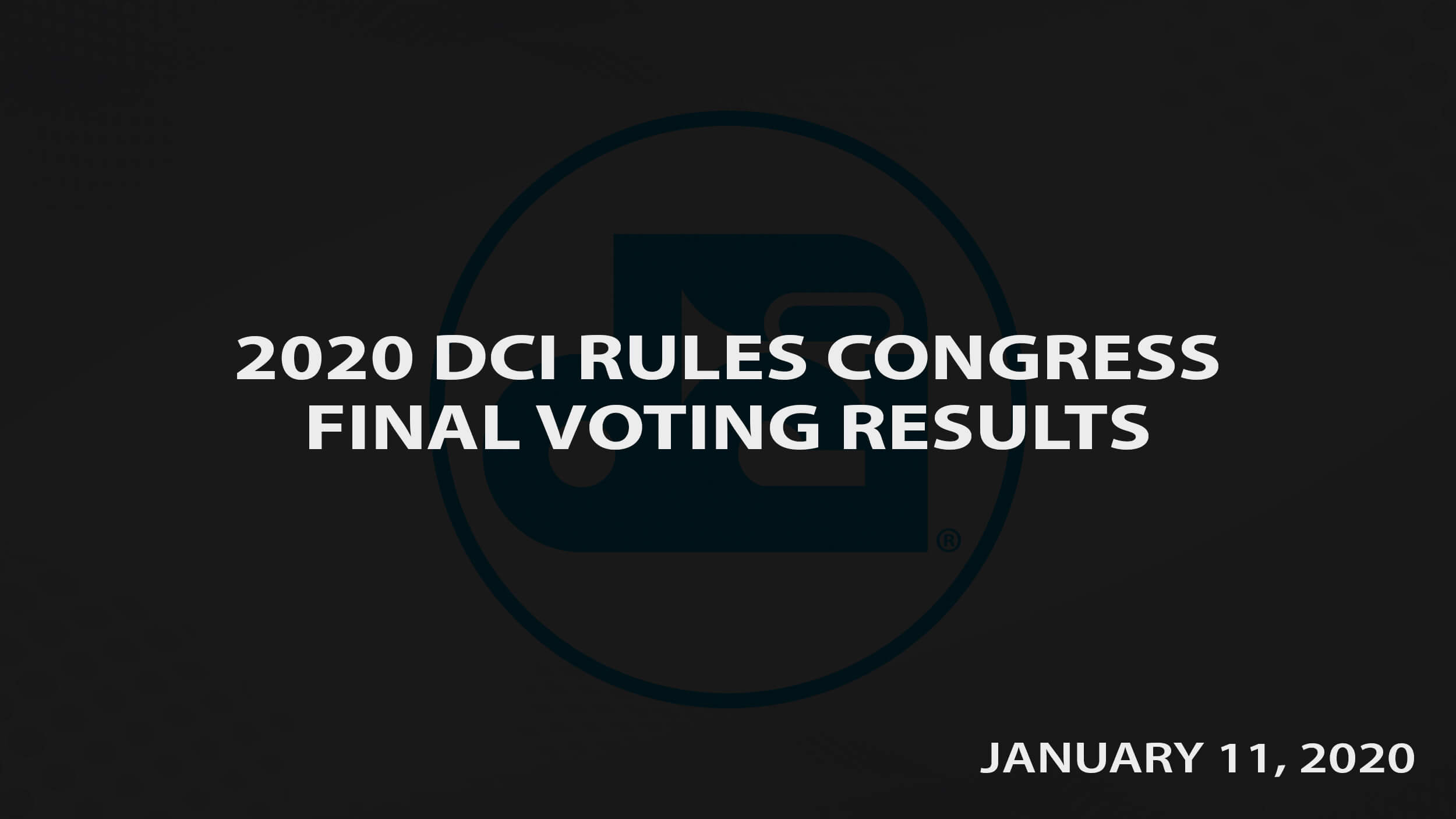 In January, Drum Corps International’s Dan Potter covered the results of the 2020 DCI Rules Congress live from Indianapolis. The biennial event hosted as part of DCI’s annual winter business meetings, included a widely-discussed proposal to allow the use of woodwind instruments in competition. 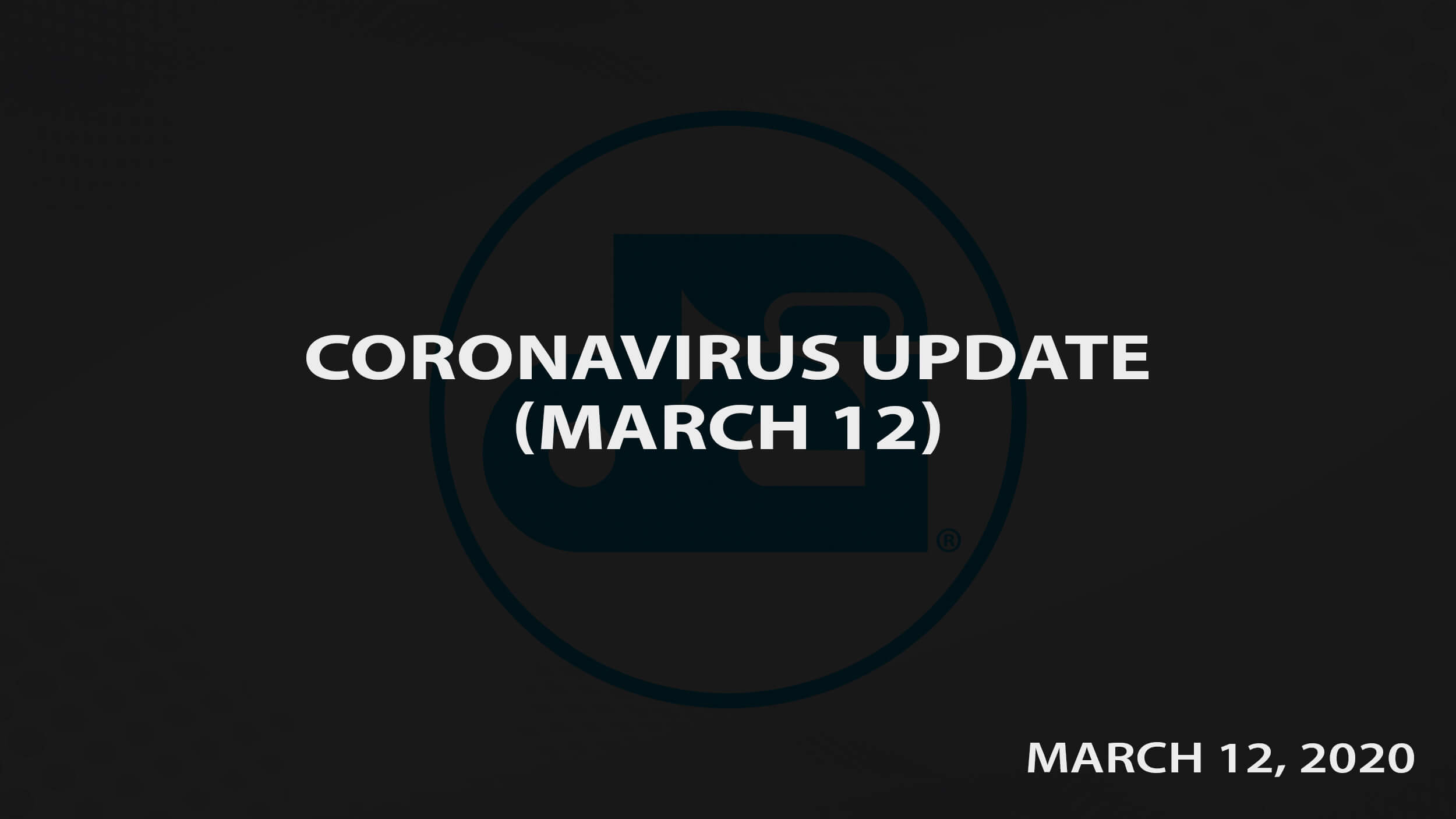 Just after DCI partner organization WGI Sport of the Arts announced the cancelation of the organization’s championship events scheduled for Dayton, Ohio, Drum Corps International released a statement on the continued monitoring of the latest coronavirus developments as they related to the upcoming 2020 DCI Summer Tour.

With so many schools and events affected at this point, we understand that many in the DCI community are concerned about the 2020 Summer Tour, which begins three months from now. While there have already been some disruptions to rehearsal camps for the individual corps this month depending on their geographic locations, there will likely be more impact on spring activities. However, at this point, we are continuing to plan for a 2020 DCI Summer Tour. 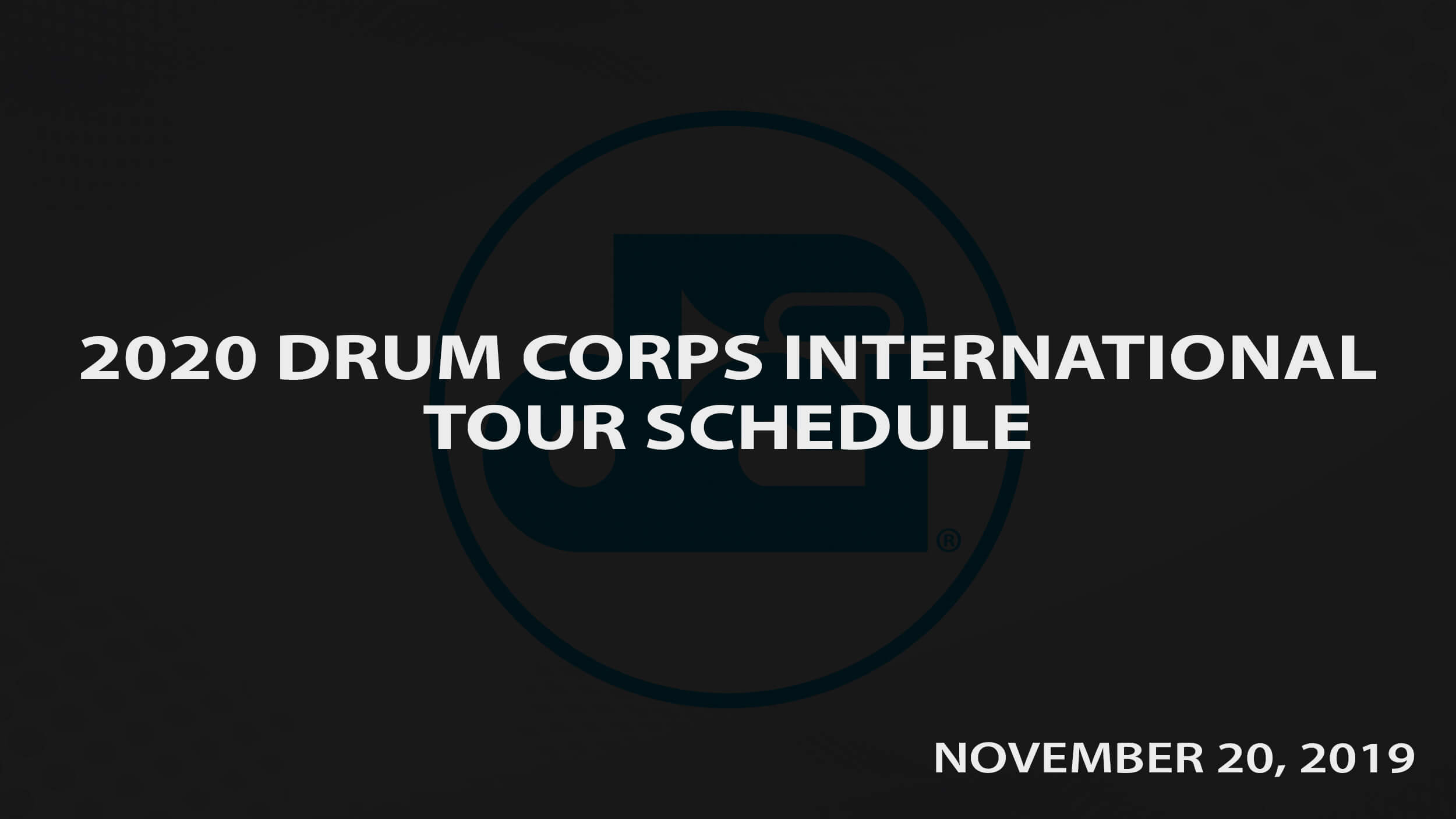 Released in November of 2019, the 2020 DCI Tour schedule generated a steady buzz into the new year before the eventual cancelation of the summer season due to the coronavirus pandemic.

Showcasing the high-energy musical and visual masterpieces of Marching Music’s Major League™ from coast-to-coast, this summer will feature more than 100 competitive events over the course of 52 days, from the DCI Tour Premiere in Detroit on Thursday, June 18, all the way through the 2020 DCI World Championship Finals in Indianapolis on Saturday, August 8. 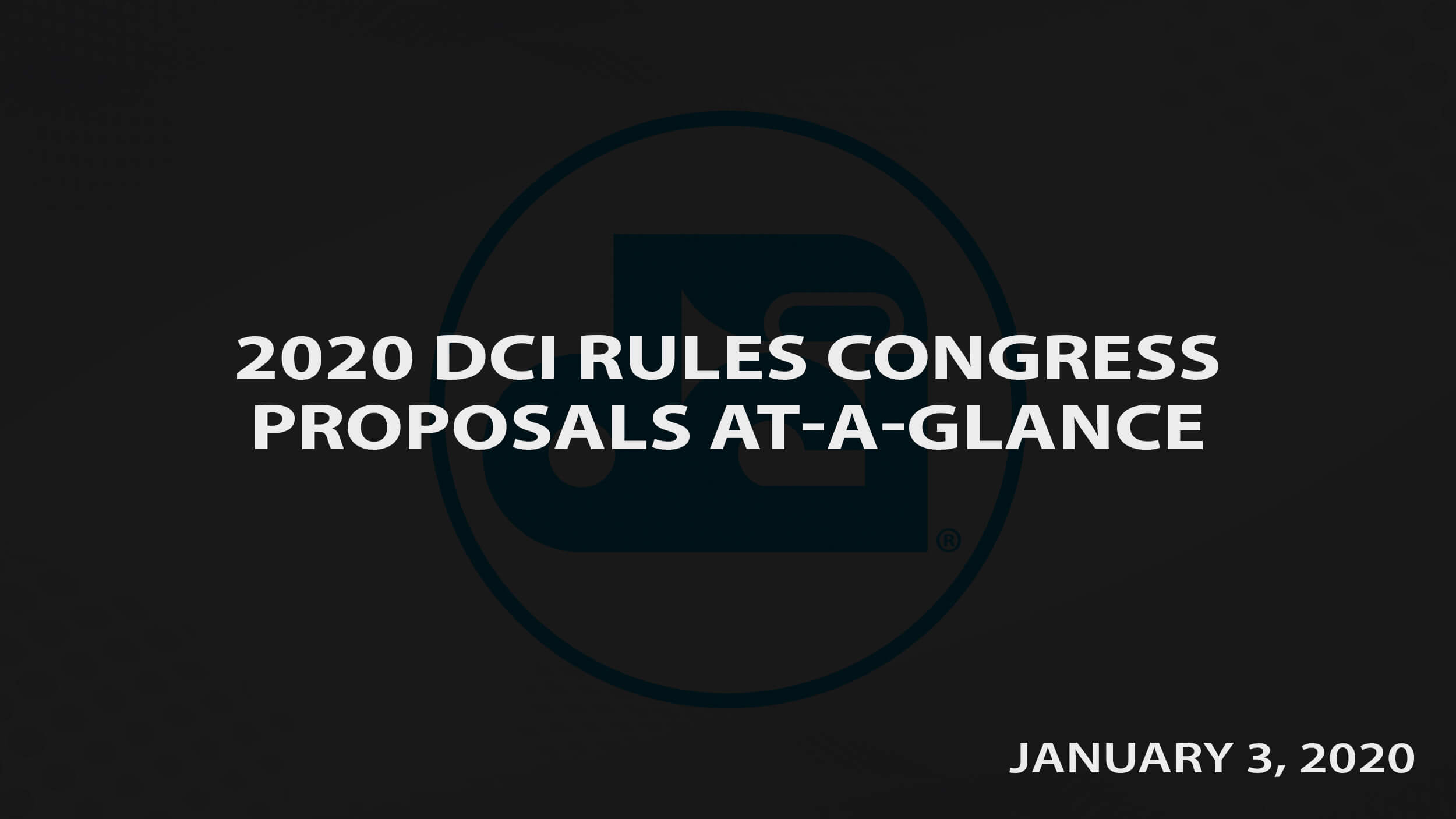 Prior to the start of Drum Corps International’s annual winter business meetings in Indianapolis, DCI previewed eight proposed rule changes that would be discussed and potentially voted on as part of the DCI Rules Congress. This year’s batch included a much-talked-about (but ultimately voted down) “Any Instrument Policy” to allow the use of any instrument, including woodwinds, effective for the 2021 DCI season.

Eight proposed changes to Drum Corps International's rulebook will be up for discussion in January during the annual DCI winter business meetings. A biennial event, the DCI Rules Congress is a process that is directed primarily by the participating drum corps. During scheduled sessions January 10-11 in Indianapolis, drum corps instructors and designers will meet by caption in individual caucus sessions to discuss the proposals that have been vetted by DCI's Rules and Systems Task Force. 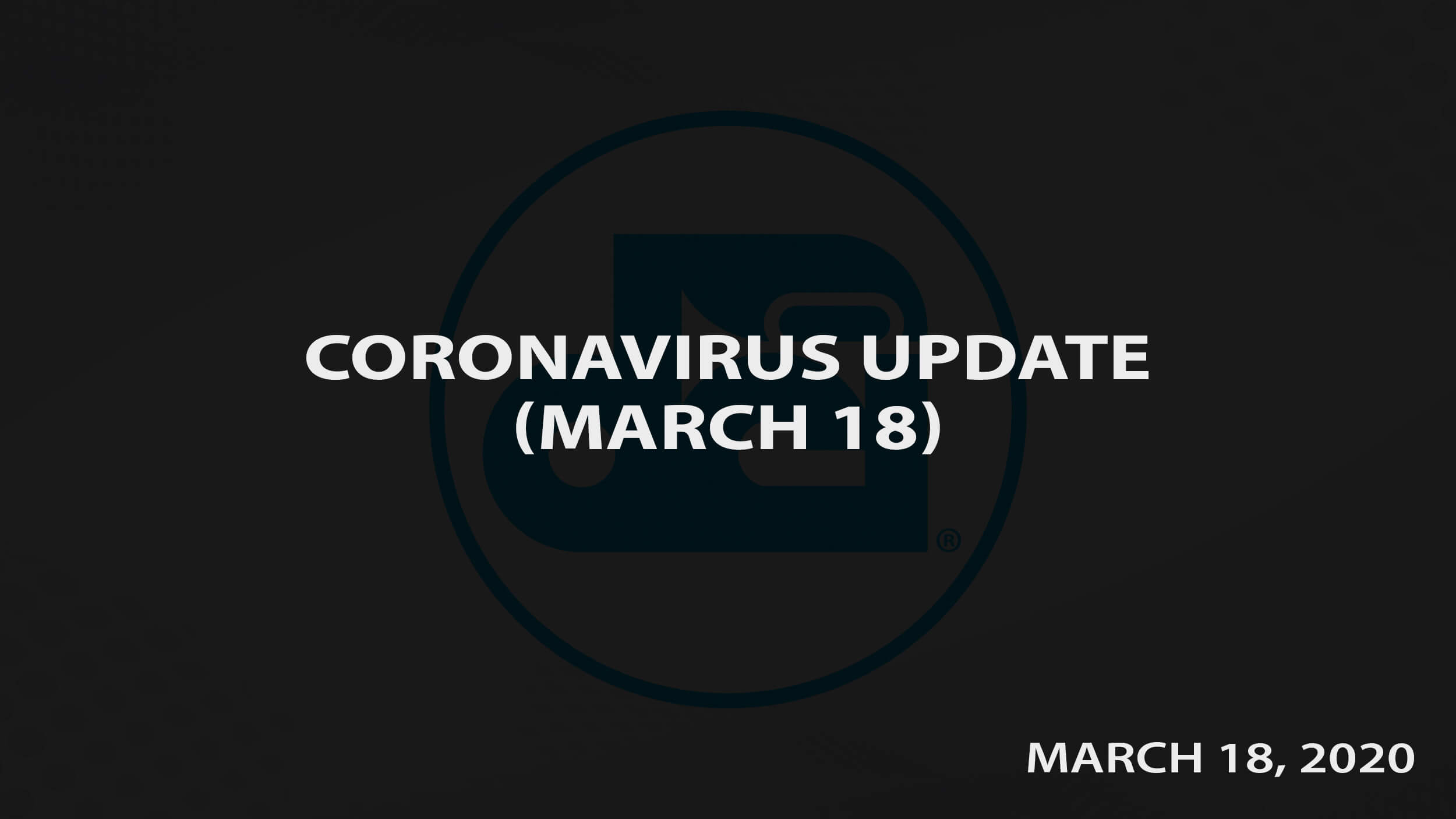 To date, all DCI corps have canceled their in-person weekend rehearsal camps for the balance of March and are in the process of canceling for the month of April as well, adhering to current guidance (President's Guidelines PDF 0316) regarding non-essential travel and avoiding social gatherings in groups of more than 10 people from the Centers for Disease Control (CDC), the National Institute of Health (NIH), and the White House. Corps will continue to respond accordingly as the situation unfolds over the next few weeks. 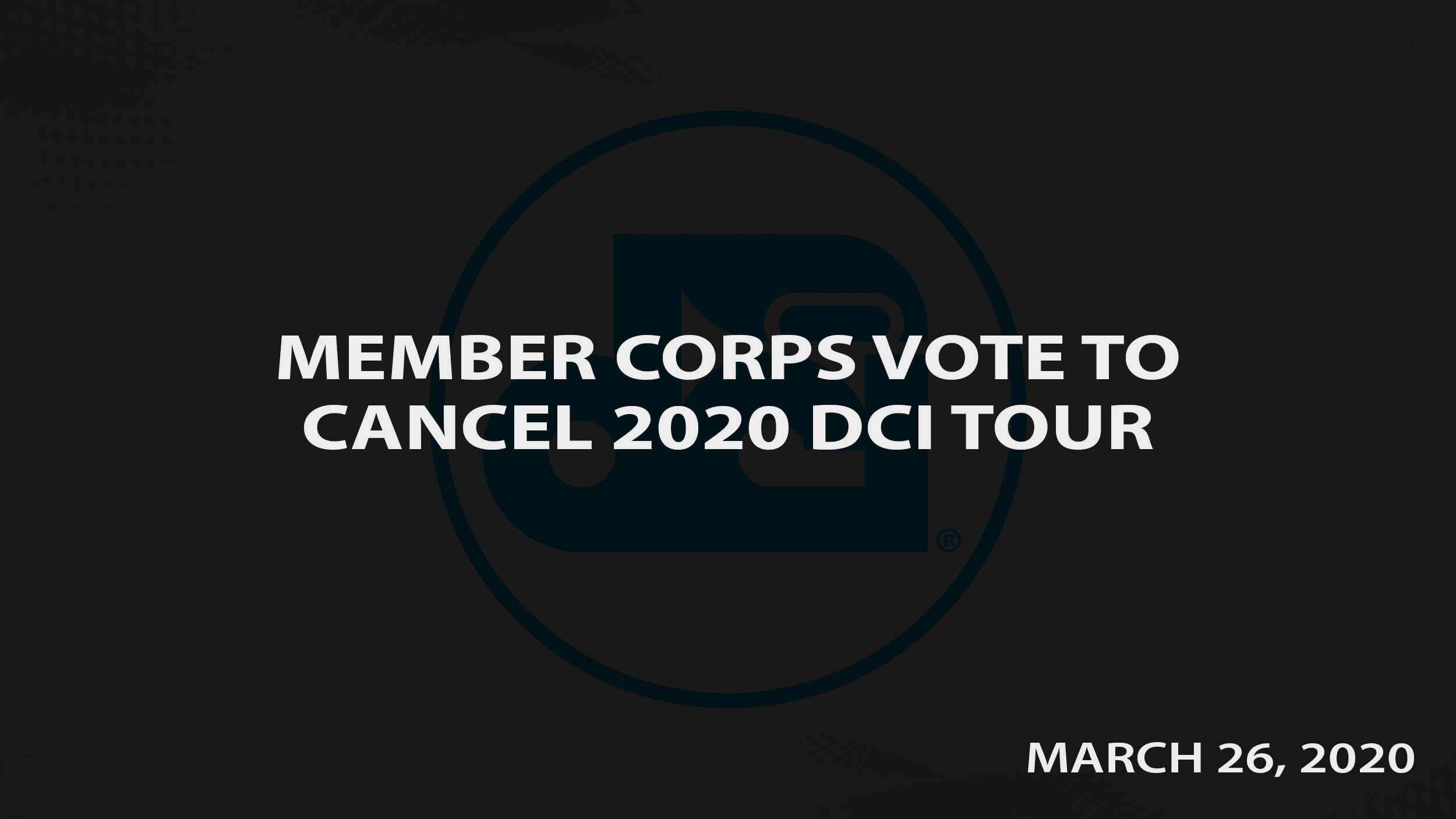 The last full week of March, representatives of Drum Corps International’s voting membership came to a unanimous decision to cancel the 2020 DCI Tour, an extraordinary first in the nearly 50-year history of the organization.

We share in the profound disappointment of the thousands of remarkable performers who will be unable to take the field this summer on the 2020 DCI Tour. We encourage every one of them to continue to commit fully to the pursuit of their personal best. We sincerely hope that corps members everywhere will continue to embrace the values taught through participation in the marching arts to remain motivated until we are able to perform together under the stadium lights once again.