Joe Smith, a frequent contributor to DCI.org last year, will be contributing essays to DCI.org on a regular basis. 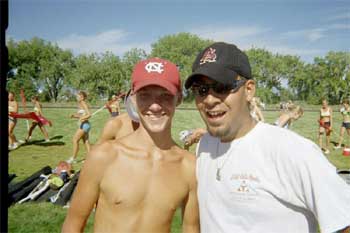 Joe Smith (left) and seat partner Steve Beatty.
Many people that know me know that I'm pretty heavily involved in the drum corps world 24/7. In this world there are many connoisseurs of fine wine, but I consider myself a connoisseur of fine drum corps (yep, you can start laughing really hard right now). I spend a lot of my free time watching drum corps, and with the love of drum corps comes an appreciation for musicals, especially with all of those that have been done by corps in the past -- from "Jesus Christ Superstar" to "Fiddler on the Roof" to "West Side Story." My ultimate favorite on the field would have to be when Santa Clara Vanguard did Phantom of the Opera in 1989. Some might remember the show for the fact that SCV won or that they scored the highest score in DCI history up to that point and up through finals night of 2002. But for me it was pure bliss, I can watch that show over and over and never get tired of it. Over the last couple of weeks the anticipation has grown for me and a group of friends as the day grew closer for the premier of the new "Phantom of the Opera" movie. Last week I even went out and bought the new soundtrack so that I could listen to it on the plane to California.

So after a bit of last-minute Christmas shopping two weeks ago, one of my close friends and I hit the movie theater in the mall for the 2 p.m. showing. By the time the movie had started I had probably listened to the CDs about 10 times, so I had high standards for the movie. I sat in awe for two and a half hours as I watched the masterpiece brought to life in a movie theater. I often had deep chills running down my back. I caught myself thinking back to videos of Vanguard on the field in '89.

I must say that the movie from beginning to end is more than worth the money to see it. The camera work and the music alone are amazing. They did an excellent job with the movie, especially when you hear the full orchestra playing at certain points in the movie. I must say that I'm very much looking forward to the next time a drum corps puts this work on the field again, as it will be amazing to see the new ideas that have come to life after watching this inspiring musical on the big screen.

Go out with some friends or even by yourself and catch this movie -- it is a movie that you will not soon forget. Have a good holiday and don't forget to go running after you eat all the unnecessary food, cause I know I will need to. 2004 columns by Joe Smith: A Picture is worth 1,000 words Dealing with tour withdrawal The Busy musical season A Hectic drum corps week Right where you left off The Other side Preparing for tour Getting away from it all: Report from a Colts' camp Strong winds, early sunset: Report from a Colts' camp Meet the visual tech New challenges in Dubuque My favorite place: Alfred, N.Y. Freezing rain, full ensemble: A report from Dubuque Discussing drum corps over the holidays